View Profile
Post bidding farewell to television with Star One's Annu Ki Hogayee Wah Bhai Wah, the small screen actor marks him self on the silver screen with a bag full of versatile roles and films... Post Farhan Akhtar's Don and series of TV cameos, Rajesh Khattar will now be seen in the coming year with various genres of Hindi Cinema...


When asked the actor about his upcoming films he replied, "I am doing about 5-6 films that are set to release end of this year and many in 2009. I am doing a movie called - Kachcha Nimbo, 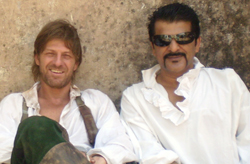 Featured Video
which is a story for a little kid... I play a very important part in his life, he calls me as - Father Adore, so you can sense the bond between the kid and me. Next in line is Jai - Veeru which is a Shyam benegal film starring Fardeen Khan and Kunal Khemu, followed by an action thriller named Beghuna and lastly the Prince of Theives with Vivek Oberoi..." On his experience with the international series of Sharpe Spheril, Khattar quotes, "I had a blast working with the team. Infact the team got an standing ovation at the BAFTA film festival... It's soon to witness it's first international premier on BBC world and other channels on the 29th of this month followed by it's release in India, which is set of the February of next year..." A lesser known fact about Rajesh khattar is his talent for Voice Over. After much of international films, Khattar was chosen to be the voice over for the main lead in Ram gopal Verma's Phoonk. "Phoonk has been something that's most close to my heart. Since Ram Gopal Verma did give me credit in the movie. Normally, directors and actors shy away if their voice has to be dubed by someone else, but the actor who was the main lead was very humble and modest about it, and I shall owe many thanks to Ramuji for giving me that recognition" he adds...


On his small screen cameos Khattar quips, "I would love to be a part of the television industry... I would always wish to have atleast one on air TV show. As a matter of fact, I would love to do a reality show, I've done various genres but a reality show is something I have yet to do. Post Annu, I have had a few offers, but I'm waiting for something to excite me... But with the strike and the production crises, I guess we'll all have to wait a while..."