View Profile
Life is changed for the x-television face Rajeev Khandelwal. Now-a-days he is all busy going through scripts and thinking about the silver screen all the while. And why not! He deserves the complete change in track after the critical success he has bagged for his role in Aamir. 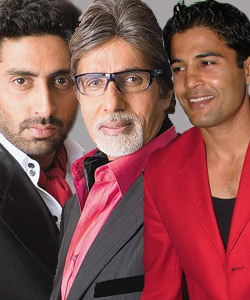 But while having an eye on the film and the stunning performance of Rajeev, Bollywood has forgotten a parallel track running where the Big B was present along with junior B and beautiful bahu. If it seems little off the track for straight minded Bollywood gossip gobblers, it’s better to get linear saying that Aamir showed the haughtiness of hitting theaters on the same date on which Sarkar Raj was also released.

Aamir's pacy storyline and Rajeev Khandelwal's performance as an NRI doctor in search of his family in Mumbai won him a thumbs up from critics and fans alike. And what happened to the star beaded Sarkar Raj? Well, we don’t need to explain anymore.

"At no point of time did we have any doubt in our mind that this film is being released opposite Sarkar Raj because we were very proud of our film. But then we believed that in today's time two films can run parallel. And personally I was very proud for being pitched against Mr. Bachchan who is a legend. At no point of time were we scared," said brave-heart Rajeev.

Rajeev, who seems to have made the right beginning in Bollywood, is not willing to say goodbye to the small screen as yet. Like every newcomer he, too, is awaiting the right script and meaty role on the small screen.

"I don't have any time for daily soaps but if TV offers me a good role I will surely do it," he ends on this note.

Why not Rajeev? The actor, who has the chance to go face to face against the Big B and that’s even at the very outset of his filmy career and on the other hand has a trail of successful soaps like Kahiin Toh Hoga and Sejal, deserves the space.