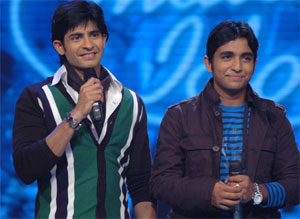 Public voting always shocks the judges; and this season of Indian Idol was no different as the judges' favorite Rajdeep Chatterjee could not get enough votes to take him past the bottom six. And as a result of this, the very talented guy was staring at an early exit from the show, but as Annu Malek put it, the show eventually did not lose a bright talent in its very early stages.

However, the narrow escape of last week seems to have spurred the ever smiling young man even more to give his best shot to his singing. His performance in this round once again raised the bar on Indian Idol. He sang Sonu Nigam's Ae dilruba … with such verve that he won over the judges and the audience with his performance.  One hopes he stays on the show until the finals. He deserves to be there and voted in.

Tune into Indian Idol 4 to watch the rocking performances of the boys and to know more about this contestants this Friday October 31, 2008 at 9.00 p.m. only on Sony Entertainment Television.

+ 7
14 years ago he'ss sooo cuteee hahah he's my fave amongst the guys along with Mohit!

14 years ago rajdeep is my fav aswell...gud luck to him.
awwww hussain is looking soooo cute.