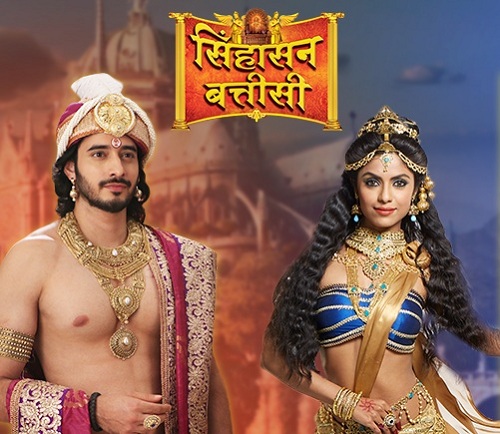 Sony Pal's famous mythological show giving out anecdotes and short stories from the history, Singhasan Battisi, has kept the audience much hooked to the television screens. TellyBuzz has been constantly updating you guys with all the high points and short stories that the show will be seen bringing up in the upcoming episodes.
Well yet again, we are back with two new short stories of the show which will definitely not end ceasing the viewers.
Our source informs us, "Viewers in the upcoming episodes will see some really fascinating stories which the makers of the show are all set to speak out loud to its viewers. In one of the instances, there is this young boy named Gopal whose father Ganga wants to sell his Ox since it has aged. Hence for the same, Ganga calls out loud to the people of the village that if they wish to buy an Ox, they can visit Ganga. But then what happens is Yamraj's miracle. Ox all of a sudden gets so much of energy that he starts beating Ganga so much that he ends up on a bed with body half broken. Later, Vikramaditya (Karan Suchak) brings Ganga's wife and his son Goapl to the palace and asks for forgiveness. This is one instance that the viewers will see in the upcoming episodes."
"Up next that the viewers will witness is that Raja Bhoj (Siddharth Arora) plans to do a maha yagya named Rajyog Yagya. And hence for the same, he calls Purshottam (Ansh)  Rishi to help him. His spirituality is so influential that every step he takes, the earth bears flowers. Rishi Purshottam asks him to feed and treat all the devtaas (Lords) before commencing with the maha yagya. Eventually the two starts with the puja and gets all the things done," ends our source.
Well, this is something that our viewers will long to watch, isn't it?
Keep reading this space for more details on your favorite shows.
Upasana Patel

clefairy 6 years ago there is some prolem with Karan Suchak's page i failed to post a comment two days in a row.

+ 3
9 years ago She couldn't have been more true.Every child DESERVES an education-its their RIGHT.and i didn't knew she was involved with such a noble cause...makes me love and admire the woman even more!!! She z such a wonderful soul..