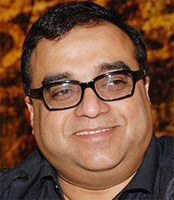 Films based on historical adaptations have been a popular trend in Bollywood. It includes big flicks like ‘Mughal-e-Azam’, ‘Tajmahal’, ‘Jodhaa Akbar’ etc.

Now director Raj Kumar Santoshi also takes up the play way.
His next film is an adaptation of Asghar Wajahat’s play ‘Jis Lahore Nahin Dekhiya O Jamian He Nahin’. This film will see Akshay Khanna and Sanjay Dutt in lead roles.  Both will play brothers in this historical adaptation.
It is known that actor Sanjay Dutt has roped in new talent Neha Oberoi in this film. She plays a cast opposite Akshay Khanna.
The director is well-known for his films l'Khakee', 'Halla Bol' etc. Hope the magic continues.
Featured Video