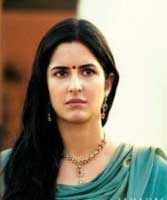 Katrina Kaif owes a lot to the recent political flick Rajneeti. The movie has helped her shed her one-dimensional Barbie doll image and pushed her in a new light, with audience and filmmakers beginning to appreciate her as a versatile actress.


It therefore stands to reason that Kat would be the one partying the most at the Mumbai success bash held by Prakash Jha. Unfortunately, she's likely to be the only actor of the ensemble cast not to make an appearance!


Kat has been busy with Zoya Akhtar's film, Zindagi Milegi Na Dobara, in Spain. All plans were made for her to take a break and fly to Mumbai so that she could be a part of the celebrations before making a quick trip back. However, unexpected downpours on the sets earlier cancelled many shoots, meaning that the Zindagi team are working overtime to get all the required footage.


Subsequently, the actress's request for a two-day break was denied. Katrina also offered to make it back in 24 hours - hoping to fly out on the day of the party and practically return to Spain the same day. However director Zoya already has her hands full and refuses to lose any more time.


Katrina is surely disheartened with the news but has asked Prakash Jha to hold another party when she returns.