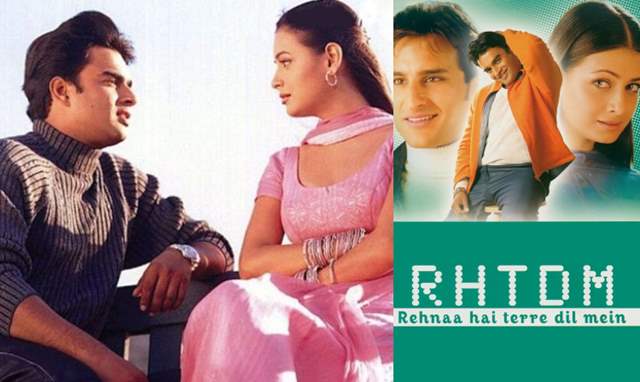 Actors R. Madhavan and Dia Mirza’s Rehnaa Hai Terre Dil Mein (also called RHTDM) clocked 19-years on October 19 this year. The film was known to be an instant hit amongst the audience and the fans have been earning for a sequel for a long time now. The film also starred Saif Ali Khan in a pivotal role which turned out to be a perfect romantic flick that redefined love.

Over the years, RHTDM has become a cult classic with its melodious tracks like Zara Zara, Sach Keh Raha Hai, Dewaana, Dil Ko Tumse Pyaar Hua, etc. Owing to the popularity of the film, a sequel was in talks for the longest time. However, director Gautham Menon couldn’t get along with Madhavan and the producer could not see eye to eye with the director.

Now, speaking to SpotboyE, Madhvan has commented about the same as he said, “I don’t want to get into what went wrong. But yes, many things did go wrong. All of us worked really hard on the film. 19 years later Rehnaa Hai Terre Dil Mein is still among the most favourite  films of my repertoire.”

While the actor is not entirely against the idea of a sequel, he seems to be unsure of the team coming along for the rumored project. “I  keep getting that all the time. But is a sequel possible now? For that to happen, all of us have to be on the same page. I’d love to take the story forward from where we left it off 19 years ago,” said R. Madhavan.

Gautam who also directed the Tamil original Minnale, says, “I don’t at all mind directing the sequel to Rehna Hai Terre Dil Mein. If the producers ask me, I will.”

The film which also marked the debut of two of the lead actors, R. Madhavan and Dia Mirza, is considered to be a cult classic not only for its direction but also for its music that is loved by millions even today.

It is also reported that Jackky Bhagnani will bankroll the sequel. Meanwhile, none of the actors or makers have confirmed the same.