View Profile
Siddharth Malhotra and Cinevistaas, the makers of the popular cult show Sanjivani and Dill Mill Gayye, have returned to Star Plus after a hiatus with their new show Ek Hazaaron Mein Meri Behna Hain...

The show tells the tale of two sisters and the deep bond that they share. The show is already on air and TellyBuzz had an exclusive chat with Producer, Siddhart Malhotra, who openly shared his experiences about the show and also the trends in television today... 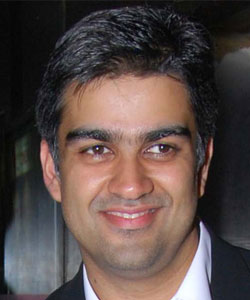 Take us through the making of the show, and its concept.
We wanted to bring in a show which talks about two sisters, but at the same time it had to be different from the tales that already said. After the death of their parents it is the elder sister who becomes the father and mother for the younger one. The show is completely character and vision driven. And that is why we have chosen places like Hrishikesh, Missouri and Chandigarh to shoot this show.

Tale of two sisters has become a common concept in the industry; how different is the story telling in your show?
There has to be a conflict in the show for a story to develop. The show depicts the bond that the sisters share and that itself is the conflict of the show. Both the sisters would live and die for each other. When the younger one does it for her sister she ends up in a mess which her sister covers up later. This will later on complicate the situation and the story will developed accordingly.

Take us through the characterization of the two sisters, Jeevika and Maanvi? How diverse are they in nature?
Jeevika, portrayed by Krystal is a very calm person. She is extremely sorted who gets adjusted to any situation and obeys her Beeji's (Anju Mahendroo) orders to the fullest. Since their parent's death she has been the mother and father to her younger sister Maanvi played by Niaa. Maanvi is a rebel who is very impulsive and hates if anything bad happens to her sister. She lives for Jeevika and tries to get the best for her.

How did you go about casting Krystle DSouza and Nia Sharma for central roles?
We had done a lot of auditions and once we got Krystal I did not want to lose her. She had the face and look that were apt for Jeevika. Krystal, so far had not tried a completely Indian character and it would be a fresh look for her. She has the grace and the dignity that is needed for the role. After the elder one, we auditioned half of the industry for Maanvi but we were just not getting the right girl. Then Rohini Singh mentioned about the second girl who was in Kaali - Ek Agnipariksha. Once we auditioned her, I did not want to lose her as well. I feel very protective of her like an elder brother. I have three sisters and now I have four.

We have heard that you are in complete praise for the amount of talent that Nia has. How was your experience working with her?
Nia is extremely talented and she is more or less like Maanvi which makes her even more natural in the outcome she produces. She is pure and speaks from her heart. She is like Maanvi who speaks first and then thinks.

What about the male leads, Abhinav Shukla, Karan Tacker and Kushal Tandon?
Abhinav plays the role of Dr Manant who is a responsible person and has a crush on Jeevika. And Maanvi wants him to marry Jeevika as she thinks only he can make her sister happy. Also she does not like anyone else to come in between them which the audience will see in the third episode. Karan plays the character of Viren, a Harward student and lawyer by profession who hails from a family of Lawyers. He is a very responsible man who adheres to family values and is connected to Seema Kapoor more than his mother. Kushal plays the role of Viren's younger brother, Virat who loves his brother and is a very happy go lucky person. He is very attached to his mother, but at the same time he has his own opinion and acts according to his wishes. Though he listens to his family, when it comes to implementation he listens to his heart. His character is similar to Amitabh Bachchan's in Sholay.

Considering the buzz, what kind of feedback are you getting for the show?
We have actually created a Facebook page for the show. So better than asking me, it would be better if the viewers visit the page and see the response. The general feedback that I received from both the television and the film industry has been good. But simultaneously we have to realize that the ultimate decision is taken by the audience and for that we will have to wait and watch.

Cinevistaas has usually dealt with unique youth based shows like Dill Mill Gayye. How difficult is it to move to a family oriented genre?
It is still a youth based show with equal element of family in it. We are all young people and the characters in the show are the people you can identify around you.

Can we sense the typical Cinevistaas stamp on this show too?
Completely, because Cinevistaas has always been youth based and you will see the freshness in this again.

Apart from the beautiful locales of Hrishikesh, where do you plan your outdoor shoots?As I mentioned earlier we had gone to Missouri and Chandigarh for the shoot. In a way Cinevistaas is the pioneer of outdoor shoots.
You have got a good experienced bag of senior actors in Anju Mahendroo, Seema Kapoor, Indu Verma and Anupam Bhattacharya. How do you see the ensemble cast working together?
As of now, everyone has gelled well and we all are like a family on the sets. We give the liberty to the actors for their inputs as well. We have our director Sankrant Verma who sits with them and asks for their contributions because we believe that this aspect will button up the graph of the show. And it is the actors right to give their suggestions as they own the show.
After DMG, this is your next big dream project. What are the expectations?
Frankly speaking, Sanjivani was a bigger show and DMG was comparatively easy for me. As far as this show is concerned, we have done an honest job and the honesty will be reflected in the show. We have not hyped our show much like Bade Bade Acche Laggte Hai or Kuch Toh Log Kahenge. But still we expect a decent start after which we will stir up. Right now we have completed fifteen episodes and I will be there for another forty after which the project will be taken over by my team.
Are you happy with the time slot, especially considering that you have some decent competition coming from different channels at the same slot?
Honestly, we have to face competition, whichever time slot it may be. If you have marketed your show well and if the content is good, people will watch it.  One of the biggest examples is Saathiya which is doing extremely well without much promotion. If your marketing is less, then you will purely have to rely on the content of the show.
Your views on television and competition for TRPs today.
I just hope that progressive television comes back. There were days when we had an Air Force based show like Saraa Akaash, a medical show like Sanjivani, a complete romantic story like Des Mein Nikla Hoga Chaand. If we notice, we had variety of shows earlier running on the channel. But today I feel television is going to the dogs and seriously speaking, I do not like even one show other than Bade Acche Laggte Hai on TV. People relate to that show because of the situations and the characters whom we can relate to. Hence I would come up with a show only when I like a subject and feel the need to highlight it.

Which is the show, in the existing lineup across channels which has made a mark, according to you?
Bade Acche Laggte Hain. I do not miss an episode. Ekta Kapoor is a genius and there is also Prashant who works for the show from whom I have learnt everything of television today.
How do you see the future of television going?
The bubble will burst any time because this is an era where unexpected films are attaining great success. Audience is unpredictable and this is a cycle wherein the bubble can burst any moment.

7 years ago I was in love with juhi in sanjivani! I hope they bring it back with the same cast. I just found it on YouTube and started watching it again!

+ 2
9 years ago I remember saara akash and who can forget kis desh main nickla hoga chand I used to love it watched it when I was 8 and being from london I love how the love story was set in both Indian and London made me feel my cultural roots. Siddharth malhotra I seriously hope u get DMG season 3 back on some channel because Armaan-Riddhima is a jodi no 1 can forget!

9 years ago ehmmbh is awesum!!! luv the show, nd the chemistry between the actors!! :)

Understand your audiance.. and don't disrespect them.. that should be his first learning!!!!!!