View Profile
After a long break, Hiten Tejwani recently made a comeback in television with Star One's Rang Badalti Odhani.

Seems like the guy is hooked up with work since then as he will be seen as the new host of Imagine's most awaited show, Swayamvar Season 3 - Ratan Ka Rishta.

In a chat with Telly Buzz, the actor says how he feels taking up a show like Swayamwar wherein he debuts as a full-fledged host. 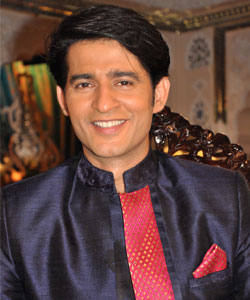 What made you choose a show like Ratan Ka Rishta?
As an actor I wanted to do something different and I felt that being a host I can be myself in a show. I believe that hosting takes a lot of effort and it is actually fun.

Apart from the role as a host, you will also be seen as a friend of Ratan Rajput, what are the qualities you are looking for the guy who will marry her?
Actually, Ratan has a final call in this and personally I believe that every girl looks for a guy who is well to do and independent. The girl looks for a guy who takes care of her and the overall personality matters for the girl.

You are appearing as a host for the first time, how do you feel?
I feel really great because I had earlier seen certain parts of the previous seasons. Though I have done anchoring before, this is the first time I am hosting a full- fledged show all by myself.

What do you think are the challenges as a host and especially for a show like Swayamwar?
The show consists of various contestants who are from different walks of life. You have to deal with them in different ways unlike other shows where you are just giving a commentary to what is going on. These are among the small little challenges that I have to take care of in the show.

There were a lot of issues connected to the series of Swayamwar; weren't you apprehensive before taking up the show?
Yes, there have been issues after the season of Rakhi Ka Swayamvar and Rahul Dulhaniya Le Jaayega (Swayamvar Season 2), but at the same time we should understand that whatever happens after the show is all in their personal life and it is up to them to deal with it.

How is it working with Imagine?
I had worked with Imagine for Kitani Mohabbat Hain before, and it is lovely to be back with the channel.

You stepped into the shoes of Ram Kapoor as a host, any tips you took from him?
Not really, because every individual has his/her own style of hosting. I know people might compare me with Ram Kapoor, but at the same time, they will see a different and real Hiten Tejwani in the show.

How would you describe Ratan Rajput?
Ratan is a very simple girl and she knows what she wants in a guy. Normally people get confused as to how his or her life partner should be. But she is very clear about her guy.

Will we see Gauri sharing screen space with you in the show?
No, not in Swayamvar.

Do you think Swayamwar will end in Ratan marrying her suitor? What's your gut feel?
Yes, definitely, but it all depends on Ratan. Because she knows that people are watching the show and that is why she knows that she wants to get married.

What are the preparations you had to do to get into the shoes of a host?
Actually the show demands spontaneity and hence preparation doesn't actually matter in the show.

bakht 9 years ago luv u ght ...luv to see ght back on tv as ght always rockkk...

Mehruhgt 9 years ago luv u ght ...luv to see ght back on tv as ght always rock

Mehruhgt 9 years ago Best of luck to ght ...and hiten u looking tooo cute in pic:)

brinda_ght 9 years ago hope to see u guys together in a new show..miss u GHT