View Profile
It was nothing short of playing a double role in 'One Two Three'. To add to the fun, it was a dual personality character that he had to get through his body language, mannerisms and dialogue delivery in this Friday's comic release 'One Two Three' which is produced by Kumar Mangat and directed by Ashwani Dheer.

"It is anyways difficult to play a double role. And imagine how it would be to enact a double role for just one character", says Tusshar who plays the role of 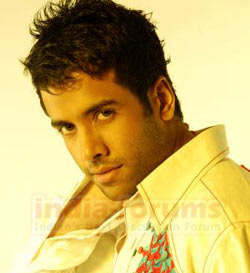 Featured Video
Laxminarayan in the film. While he is a simpleton at heart, his family lineage forces him to graduate into underworld. This is where the dual personality angle comes in.

Laughs Tusshar while talking about the character as he says, "I am required to be a don just because I am born in the family of one. It is more of a hereditary factor and his mother is pushing him all the while to join the 'forces'. Of course, he complies since he is a 'seedha saadha bachcha' but his heart is not in the job. He goofs up and messes up affairs but still tried hard."

Talking more about his character in 'One Two Three' and drawing comparisons with the one he played in Apoorva Lakhia's 'Shoot Out At Lokhandwala', he reveals, "In 'Shoot Out At Lokhandwala it was straightforward since he was mental and a psychotic. He was a real don and there was no effort to portray him any differently. However, in 'One Two Three', he 'tries' too hard to be psychotic, and of course fails!"

"He shifts into this double role play more often than not", says Tusshar, "There I am like my mother's ideal son who wants to fulfill her desire of seeing her son rise to the top of the ladder. And there I am who tries to do his best to please her and acts and behaves as a don whenever he gets a chance. Anyways, it all turns out to be an exercise in futility as whenever he is confronted with cops, he turns into this 'bechara', his natural self, once again."