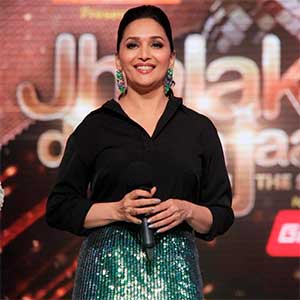 BBC Productions Jhalak Dikhlaa Jaa is back again with its season 7 on Colors TV. Well the show aims to explore the dancing talent of the 14 contestants. The show as we all know is judged by one of the most acclaimed director Karan Johar, ace choreographer Remo Dsouza and dancing diva Madhuri Dixit Nene.

While the legendary actresses presence is only enough to inspire these contestants to perform  in the competition but they also aim to achieve something like Madhuri in their life.

For the same we got in touch with this veteran and stunning actor Madhuri Dixit Nene who has left no stone unturned in mesmerizing her audiences through her adayeins, perrrfects and the thumkas since past three years as the judge of Jhalak Dhiklaa Jaa.

This season as well this charming lady will be judging for the fourth time at a stretch. But this time you will see her more glamorous, more stylish than ever before.

Here is what Madhuri has to say about her experience regarding Jhalak...

The new season of Jhalak Dhiklaja is bagged with so many twists and surprises, passionate contestants and the dance styles which were not seen much frequently on Jhalak. What does she has to say about it?

There are a lot of surprises of our audiences this season. We are doing a lot more international forms this season like bolero and other several dance forms. We also have a Russian choreographer who will be a part of the team. Besides this, we also have an international dance judge Maksim Chmerkovskiy who will join the judges' panel. He is a choreographer and a well trained Latino dancer as well. When he will join us we also will get an opportunity to learn Latino dancing from him because he is just ultimate when it comes to this dance style.

How will you all adapt with Maksim?

Well Maksim will have to adapt us (laughs). We are a show which has done three seasons and he is the one who is going to come from outside. We have to welcome him warmly and we will get to learn from him as well."

You are referred to the ultimate diva when it comes to dancing in Bollywood. But we also saw in the audio-video during the launch that you were trying to learn a new style which is totally different and hatke from your dhak-dhak girl image.

Tough in the sense as it is a new style. And when you are learning a new form you always want to give your best. So that's what we were trying to do. When you are learning a new style, you also have to learn the body language, the postures, everything from scratch. I was actually feeling like the contestant (laughs). I can totally understand the thoughts and what these contestants go through when they are rehearsing for their acts. But for me, it's fun!" 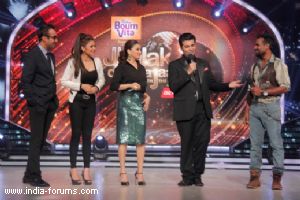 Madhuri, we have been seeing you in Jhalak Dikhlaja since past 3 years. But your look for this season is very different unlike what we have seen you in earlier seasons.

I have done three seasons of Jhalak Dikhlaa Jaa and in all three seasons people have seen me in sarees and lehengas. So this time we thought of bringing in a new look. We will try more of western and less of Indian. And even if I wear anything Indian, it will have a touch of western to it and make it look different. I just hope people like it."

How much of inputs are you giving to the designers?

This time we have heard that all the judges will get stricter than the previous seasons. What is the reason behind it?

When quality and dancing is concerned, Jhalak Dhiklaa Jaa has set an amazing benchmark. We do not want to compromise with the benchmark set and also the quality of dancing. That's why we are going to get stricter this time and getting 8,9,10 marks will actually get tougher for the contestants. Contestants will have to work hard. We will give them challenges every week in different forms be it dancing with the technologies like holograms. We will also change the choreographers of the contestants after a few weeks so that they come out of their comfort zone all of a sudden. That challenges and pushes them to get better.

Which is the most difficult international dance form in which you have faced some trouble?

There is nothing like difficult. I have done Tamma Tamma, Ke Sara Sara and other forms as well. It is only when you do a pure form of dancing you face some challenges.

DhruvitPatel 6 years ago Hie Upasana ma'am..I've been reading all your Jhalak articles and the ones after Jhalak. Truly the way you've covered Jhalak and come up with stories is amazing. I'm a huge fan of yours.keep updating us with more articles Ma'am.

_Teena_ 6 years ago Eagerly waiting for JDJ7..! Hope this season is going to be interesting as you are going to take a different look ...

Aurna_ST 6 years ago Love youuu Madhuri..You are amazing just the way you are !! Eagerly waiting for Jhalak & your Latino moves..! Hope this season is going to be interesting as you are going to take a different look but frankly speaking,you look more beautiful in Indian outfit than western ones..!
Keep rocking dancing diva!

chahat4u 6 years ago Wow...excited for JDJ7, for Madhuri Dixit. seems this season would be interesting.

_Teena_ 6 years ago I am a die heart fan of THe Gorgeous Madhuri Dixit Nene... You r the ultimate dancer ...