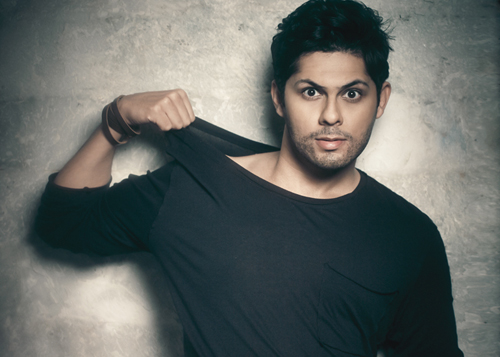 It's not ironical any more when an actor who has been in the entertainment industry for almost two decades discusses about his focus on growth aspects as an actor rather than survival in an arena where the level of competition increases day by day. Taking this seriously, actor Vishal Malhotra took a sabbatical from television and films for nearly a year to shed his image of being typecast and come up with something new and different.

And here he is... hosting the reality show Zee Cinestar Ki Khoj along with Hussain Kuwajerwala.
How has been your experience with this show till now? "The entire process has been quite exciting. I have traveled many places for this... Ahmadabad, Kolkata, Mumbai, Delhi... the auditions, short listing, studio and the gala round which has been aired on Saturday with 12 finalists. Everything reminds me of my starting days." reveals Vishal excitedly who started his career on Zee TV.

Taking the conversation ahead, Vishal appreciates the initiative of the reality show which tries to find talented people with an X-factor. And even expects nice and endearing response as the show depicts the struggle of people aiming to achieve their dreams. The first episode of this talent-based show was aired on Saturday on Zee TV and is being judged by Sonali Bendre, Anurag Basu and Vijay Krishna Acharya.

After a long time, Vishal have been paired with Hussain. Last, the duo featured in the serial Rishtey. But now, he is Vishal's co-host. How does it feel to be back together? "Awesome. We have a great time together. Our career started nearly at the same time. There is a mutual respect and liking for each other. Both of us are very unfriendly, but very secure at our end. There is no competition between us, it's only camaraderie. And of course, you would certainly find our bromance (laughs) on the show," cites Vishal.

He has always maintained a balance between television and films. Still, we wonder what he prefers the most. "Honestly, it depends on time. Every actor wants to do films and even I want the same. But there is no such preference. I consider myself fortunate enough enjoying whatever I do," explains he.

Tagging his expedition in the industry as unpredictable, Vishal now wants to experiment by taking new roles... something different that he hasn't tried before. And perhaps this is one of the reasons that after hosting five seasons of Entertainment Ke Liye Kuch Bhi Karega, he refused to host the latest season. Is there any specific role/show that you yearn for? "A lot. For instance, Riteish Deshmukh's role in Ek Villain. I want to be an actor who can put any character."

The level of competition that existed two decades ago is very diverse from the one prevailing now. What's your strategy to survive this competition? "Being in the industry for long, I don't think it's about survival anymore. Now, it's about growth. And I'm trying to sustain it by reinventing myself and approaching every project as a newcomer. I know that there are many talented people than me, but I know my capabilities too," says Vishal, who is elated about a film project, but promises to share about it only at the right moment.
0 Likes