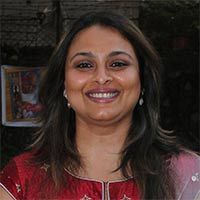 Her comeback last year much talked about since she had been away from the limelight for long. After quitting Bollywood, Shilpa Shirodkar surprised everyone by coming back on Television with a show which portrayed her as a domestic worker. The show has been a success and so has her role in it. Getting used to the grueling schedule of shooting Shilpa talks about her days abroad, "I got married to a banker and settled in London where I had nothing to do with the entertainment industry. It was important that time to take a break, make my family, do things that I never got an opportunity to do."
That did not deter Shilpa to sit at home doing nothing. She kept herself busy with things that made her happy, "In fact when I was in New Zealand I did a course in hair dressing because I wanted to work and was not used to sitting in the house alone just doing household work so I went and studied, did a diploma and worked in a parlor for 2-3 weeks but then I discontinued because my husband was a banker and used to get the weekend off whereas I had to work on weekends too. Then my daughter Anushka was born after which I really didn't go back. I was very happy being a full time mother."
Just as her character Kamlabai in the show Ek Mutthi Aasmaan, Shipa looks content in whatever she gets and does, "For me each journey is beautiful... that one and this one too. When I was settled abroad I was very happy without any help at hand but I didn't have a life and my life revolved around my daughter Anushka so I could not go with my husband for a film. Everywhere we had to take her and go but here now I have time with my husband. Suddenly we wake up on a Saturday and when she is not ready to go with us we both can go and spend some time together and that we can do only when we have a support system in place. My in-laws are here but we don't stay with them so I can only depend on my maid to help me out to keep my child properly."
She is ready to spread her wings now and has her husband's support in doing so, "He is a person with numbers and the idea to set up our own production house was with the intention that he will take care of the numbers business. Numbers is what makes it successful so he is going to look after the administration and management and I am only going to act and hire people for the creative team."
Till then she is busy with her work as an actor which she does complete justice to.
Seema Khot Mattoo
0 Likes

.giggles. 6 years ago I love Shilpa's acting. She is simply amazing:)

foram. 6 years ago tb we want Ashish and Rachana interview ...

myera 6 years ago Ek Mutthi Aasmaan is a great show.
Please give us a rachana parulkar interview.