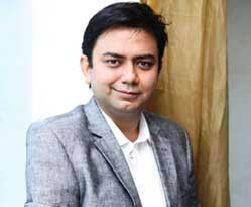 It has been touted as a 'guns and roses' love story. Along with bullets flying from the first scene itself, there was the soft angle of Paro (Sanaya Irani) & Rudra (Ashish Sharma) as innocent kids along with the emotional background which is the base of the story.

Produced by Saurabh Tiwari & Abhinav Shukla, Rangrasiya which showed promise ever since the promos hit the screens, opened to an applause for the first episode which went on air yesterday. Telling us more about how the show came into being is producer Saurabh Tiwari who is proud and confident of his product.

Rangraisya is supposed to be an intense love story. How did the concept come to your mind?

Prashant Bhatt, Weekday Programming Head - Colors and I were working on some concepts for some time but nothing materialized till one day when I was reading Othello. While reading it I thought it is such a complex character who will never be happy in any circumstances because of his insecurities. I immediately messaged Prashant that let's work something around this character and he asked me whether I want to do Othello? I said no I just wanted to do something around his character and if we have such a character who is mentally insecure then what must be the reason for that? The biggest reason will be his failed relationships with everyone around and his past. That is how we started developing the story and Rudra in Rangrasiya was born.

And how did the armed force background fit in?

It was difficult to decide where to base him, what language will he talk and where will he work, where is he from. Once I was reading the newspapers and read about the 5 jawans who were killed in Kashmir and I thought we stay in a secure environment in the metros but these people from the forces who will not even meet their families before they die stay in such trying times. And if something happens to them, everyone will forget these people after reading the news, but what will be their mental state and the place they stay in. Even they are normal people who must have had a normal childhood but over a period of time they must be having so much of mental pressure and hatred while at the same time practice self-control because your emotional quotient is so low that nothing bothers you any longer.

Why did you decide to use Rajasthan as the base?

Once we realized that we have to make a hero who is from the border we had to decide where do we show him from. We decided against Kashmir since then the flavor of the show would have changed altogether and we wanted a love story. Then we thought of Gujrat or Rajasthan and finally we zeroed on Rajasthan since practically there are lots of issues shooting at the Rann of Kutch. Since we cannot use BSF, we decided to use the name BSD.

Then we got to know that in Rajasthan there there are so many villages around the border who still don't believe that the partition has happened since they have relatives on both the sides so we thought some people will be positive and some negative. Then unintentionally and unknowingly we realized that there was no straight character and everyone was negative or grey shades. 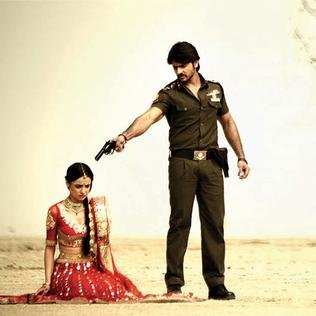 With so much of negativity what do you think will be the audience's reaction?

I don't know whether it will work or not. We as yet have not seen a hero who is so brutal and so disturbed in his head that he is an animal. He doesn't respect women since he has a dark past and that's what he realizes over a period of time but in that whole process the way he behaves since he is from the army combined with the mental state that he is in is totally different.

Why is the deshdrohi word used? Can you tell us a bit about the story?

The story is that on the border there is a village Birpur and there is a guy called Tejawat (Tarun Khanna). Tejawat has a personal angst against the Indian government since they have taken away the kitaab and the havelis have been turned into hotels which is the reality in the entire of Rajashtan today. And he wants to regain that power thus he has made the entire village against BSD. Every year there is a baraat which comes to the other side during which arms and ammunition are exchanged as dahej with girls who go as brides to the other village across the border.

While Parvati (Sanaya Irani) doesn't know anything about this, Rudra (Ashish Sharma) wants to blast the racket. According to him the girl is a deshdrohi just like the village people who feel that everyone from the BSD force are brutal and don't care for the villagers. They feel they have snatched everything from Tejawat and thus they have this angst against the Indian armed Forces.

So what genre does Rangrasiya fall into?

Rangrasiya is a love story with patriotism as the backdrop and the best thing about the show is the characterization. We will be working on the edge and by the end of one week the show will be the next big thing on TV or else it will be washed out that is the level of risk involved in it.

You seem to be very proud of this show.

Yes, I am since it is a show where the story and the writing has been the most importance. Shooting at a grand scale is just a facade and I am sure everyone will like it but then I can make the same story and make it for a regional channel in lesser budget without all the glam sham. Even if we shift the shooting from the desert to any set it will not make a difference but the show's beauty which I am proud of is of the writing and the characters and the conflict.

After showing the desert ultimately the story is going to shift back to the house since it is not practically possible even budget wise. Of course there will be a family but not like a saas bahu saga. I believe that love stories should be finite and if you can tell a love story very nicely but then jitni jaldi chalti hai utni hi jaldi fizzle out hoti hai. I want all my shows to be finite. I want even Rangrasiya to be finite but again it is a number game and if the channel gets a good rating at this slot for our show then they may consider shifting Bigg Boss too!

Haridas 5 years ago Ashish Sharma waiting for the official announcement of your upcoming show with ST.

baranya 6 years ago At the end of the day it is like any other show on television Mr.Tewari. You already copying scenes from her previous show iss pyaar ko kya naam doon?.What's up with that too much skin show on the main female lead Mr.Tewari? By doing this do you want to increase your TRPs
? Your other shows are already doing so bad that one is already getting closed on january24th and madhubala is going nowhere so this looks like your final attempt to save yourselves. Shame on your Production House. No professional values. Finally please change her clothes and cover up her skin by giving proper dupatta. Finally if you want this show successful please bring Barun Sobti and this show will automatically becomes No 1 show on TV.

samirao 6 years ago RR will become a super hit show of colours in small priod of time , story , music , dresses , sets and ofcourse sizzling chemistry of sanaya and ashihsh , every thing is just more then perfect

SHEENAAS1 6 years ago After seeing yesterdays epi i am sure that Rangrasiya is going to rock...sanaya irani nd Ashish Sharma grt job guys...love u both...

sumamagal 6 years ago Sanaya, you are rocking as Paro in Rang Rasiya...Love you loads!Keep rocking Sanaya Irani ..

LyssaPie 6 years ago Totally agree you! The show is shaping up really well and we're only on the 3rd episode

My favourite part was when Paro tried to run away and then Rudra grabbed her by the arm! So intense! :D

Urmila Matondkar Does Not Regret, But Ready to Apologise for ...
16 minutes ago

Shabana Azmi speaks about recovering from her Devastating ...
39 minutes ago

Who is AK in Sushant's Unseen Video that has Surfaced? Watch ...
43 minutes ago