View Profile
Actor Uday Chopra plays a geek in forthcoming 'Pyaar Impossible', for which he has turned scriptwriter too, and he says the film is all about how the looks of the lead characters impact their lives.

'The look is very important for the film because it's all about outward appearances. 'Pyaar Impossible' is about a guy who looks like this (a geek) and a girl who looks like that (a star). Will they ever be able to get together? So the whole film rests on looks,' Uday told IANS.


'When I first thought of the subject of a beauty and a geek, I knew that this is a kind of character Priyanka would be able to play brilliantly. She was in my mind while I was sketching the character,' he said.


He admits that the story has some slice of his real life experiences, but clarifies that it's neither autobiographical nor inspired by international reality TV show 'Beauty and the Geek'.


'It's not really autobiographical. Everyone, mostly in his or her school or college days, falls for someone unachievable, whom they can't express their feelings to. It happened with me as well. I borrowed a few of those moments but the main storyline is fresh and the idea didn't come to me from the reality show 'Beauty and the Geek',' said Uday.


He was also in 'Dhoom 2' (2006) but it was Hrithik and Aishwarya who walked away with the credit for the film's success.


The idea of 'Pyaar Impossible' was lying dormant in Uday's mind for a long time and after 'Dhoom 2', he decided to pen the story as he had some free time.


'I didn't know that I would ever make a film out of it. I had the idea so I started writing the story. There was nothing else to do except a few behind-the-scene jobs, which didn't take much of my time,' said Uday.


Asked what stopped him from directing the film, he said: 'My primary goal was to make a movie with the best of my ability. It was not that I have to make the film, I have to write it, I have to produce it and I have to direct it. So at that point I thought it's better I don't direct it because I had to focus on too many other things.'


Talking about co-star Priyanka, Uday said: 'It was a great experience working with her. I was really apprehensive at first because I had never worked with her before and didn't know her well also. Once we started the film, I was not only surprised but also genuinely bowled over by her. She is not only a good actor but also a great team player.'


Apart from writing the script, Uday has been managing the new media division of Yash Raj Films.


'I was writing the script and at the same time I was looking after the Internet department and the entire new media division of Yash Raj Films...When I came on board, I decided we must get into all the portals - be it iTunes or Google. I was basically behind the scenes doing that until this film started,' said Uday.


'Pyaar Impossible' is slated to release Jan 8 next year. 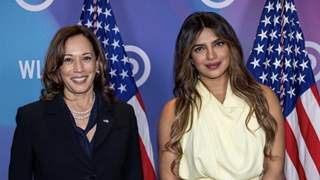