Purab Kohli who is basking in the glory of success with ROCK ON and got critical acclaim for his performance in "My brother Nikhil" is all set to anchor SRK's first ever reality show on television "Knights and Angels", on NDTV Imagine. 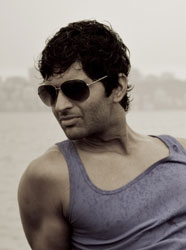 "Initially I was thinking whether I should go for anchoring all over again. It's been one and a half years since I left television, but then looking at the size and format of the show I couldn't say no," says Purab.

He started his career as a model. He got a chance in acting with the teenage show Hip Hip Hurray on Zee TV and then shows like 'Chota Moo Badi Baat' and 'Sangharsh' for B4U followed. He made his Bollywood debut with 'Bus Yuhin' (2003) opposite Nandita Das.

"I took the offer firstly because I was aware that cricket is worshiped in India as a sport. Secondly, I get the privilege to be the solo anchor, and to top it all, all contestants are females. Also, the offer was from SRK's production house and the duration of the show is only for six weeks. SRK is a great entertainer and is an achiever all the way. I enjoy his films", reasons out Purab.

So is there any kind of preparation that you are doing to host the show? "I have hosted music and countdown shows but this is first time that I'm doing live anchoring and this is the latest trend. I'm nervous and excited too and have been rehearsing for the same. The shooting of the show is yet to start and I am looking forward for it," he quips.

Pranjal Khandhdiya, Creative Head-Non-fiction of Red Chillies Idiot Box says, "Purab Kohli is the right choice to anchor Knights and Angels. He has the right mix of charm and attitude required to host a reality show which is a talent hunt for Cheer leaders for Kolkata Knight Rider's team".

The show will go on air on 28th February at prime time on NDTV Imagine.

Not the actual picture of Anushka Sharma-Virat Kohli’s baby: Clarifies ...

tulipbaby53 11 years ago i find it funny about how one of the reasons he signed the show was b/c the contestants were female! hahahahaha...

vaishu4 11 years ago I liked Purab in Rockon...Best of luck!

realitybites 11 years ago Purab is good choice but wasnt Juhi hosting it? Lets see how the show turns out to be.