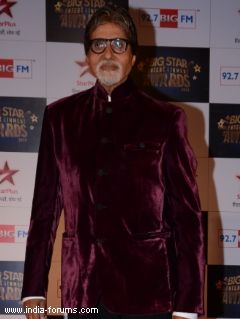 Amitabh Bachchan, who has been a part of the Hindi film industry for over four decades, mulls over the time when producers used to line up and match dates for their projects with his availability.

"Future producer says match your dates with the window given by the other in film...Time was when others matched dates with mine," Amitabh posted on the microblogging site  on Saturday.

The actor, who is currently shooting for "Bhootnath Returns", made his debut with the 1969 film "Saat Hindustani".

Over the years, he has entertained movie buffs with films like "Sholay", "Kabhie Kabhie", "Adalat" and more recently, with films like "Kabhi Khushi Kabhie Gham","Cheeni Kum", "Bhoothnath" and "Satyagraha". Last year, he made his foray into Hollywood with a role in "The Great Gatsby".

Nawazuddin Siddiqui Waited 20 Years to Work with Sudhir ...
17 minutes ago

Rakul Preet Singh confesses to being a part of drug chats ...
47 minutes ago