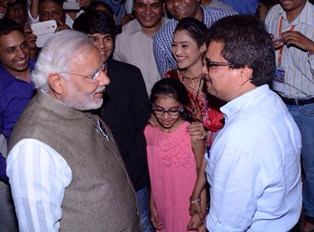 The nation is eagerly waiting for the swearing-in ceremony of their 15th Prime Minister Narendra Modi which is happening today evening at the Rashtrapati Bhavan in Delhi. While some of the famous names like Lata Mangeshkar, Sachin Tendulkar, Amitabh Bachchan, Salman Khan, etc. have been invited for his swearing in ceremony, the producer of the very popular show Taarak Mehta Ka Ooltah Chashmah which airs on SAB TV, Asit Modi has also been invited for the ceremony.

We heard that, "Producer Asit Modi and Narendra Modi belongs to the same village Vadnagar and he is invited for his swearing-in ceremony. Asit Modi is feeling honored to be a part of his swearing-in  ceremony and he will be present there."
When contacted producer Asit Modi, he told us, "We have managed to get a complete majority government and the public sentiment was on similar lines. Everybody wanted a prime minister who could bring in good governance and let go off casteism etc. Narendra Bhai has led Gujarat successfully since last 13 years. He is loved, respected and looked at by every Indian. When he was selected as the leader for BJP, I felt the joy and pride that any Gujarati and Vadnagar resident would feel."
Recently, the entire team of Taarak Mehta also visited Banaras to support him in his rally. Speaking on the same, he added, "That is when I had decided to support him as much as possible in my capacity. We ran a track in our show to advice and guide people for proper selection of their leader and we also went to Banaras to support him in his rally. Our actors like Disha Wakani, Dilip Joshi, Sailesh Lodha, Ghanshyam Nayak, Tanmay Vekariya, Shyam Pathak, Gurucharan Singh, Mayur Vakhani and others accompanied to Banaras, Vadodra, Ahemdabad etc to bring awareness amongst people. And now I am really honored to be one of the special invited guest at his swearing in ceremony in Delhi."