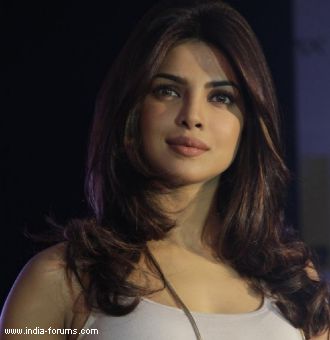 "Fashion", was surprised to see the actress visiting the sets of his upcoming film "Heroine" and said it was a pleasure to have her there.

"Priyanka Chopra it was our pleasure to have you on the sets of 'Heroine'. Your 'Jalwa' will always remain the same," Bhandrakar tweeted.

On the other hand, Priyanka had fun hanging out with Kareena Kapoor, who is playing the lead in the movie.

"Hopped in on at Madhur Bhandarkar' set of 'Heroine' and hung out with Bebo (Kareena) and my entire fashion team...such fond memories," tweeted the actress, who worked with Kareena in "Aitraaz".

Aishwarya Rai was the original choice for "Heroine", which narrates the journey of a once successful actress whose career is on the decline.

However, the project was put on hold when Ash's pregnancy was announced. Later Kareena replaced her.

Actor Akshay Kumar says his son was initally impressed with his latest film "Rowdy Rathore", but now he is fascinated by animated characters from "Madagascar 3 - Europe's Most Wanted".

"Since 'Rowdy Rathore' released, my son had only been talking about 'Rowdy'. Until today!(Thursday)... I took him to see 'Madagascar 3' and he's still laughing," Akshay tweeted.

"Madagascar 3: Europe's Most Wanted" is an computer-animated comedy film. It is the third instalment of the series, following "Madagascar" and "Madagascar: Escape 2 Africa".

Co-directed by Eric Darnell, Tom McGrath and Conrad Vernon, it is set to release in India Friday.

After "Brick Lane", Satish Kaushik is excited about his next English language film - "Promise Dad".

Helmed by Ritesh Sinha, the film is about emotional connect between a father and a son.

Earlier Satish featured in the award-winning 2007 British drama "Brick Lane", Directed by Sarah Gavron, the highly acclaimed film was an adaptation from Monica Ali's novel of the same name.