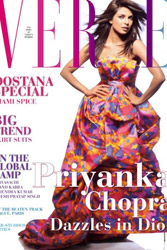 After Minnisha now Priyanka to be a part of fashion magazine. Yes, beautiful, curvaceous Priyanka Chopra is so much involved with the promotion of her upcoming film "Dostana" that she is leaving no stone unturned.

The actress has got herself on the latest edition of "Verve" the fashion magazine. The magazine has got her on the cover and has even named it as Dostana Special.
This issue is really very special, especially for Verve as it marks their debut in Bollywood with "Dostana". In the movie Priyanka plays a role of a Verve Staffer and not just that, the magazine plays a key role in the movie,
This magazine includes fashion shoot on the film's Mumbai sets, interpretation of Dostana working woman executive. It has a feature named "Miami Spice" that has exclusive offering about behind the scenes from the sun kissed beaches of Miami, where much of the film is shot.
Besides all this, Priyanka shares about her relationship with music apart from her family. It also includes her daughterly side.
A lot more about Priyanka is part of the magazine. To know them all just grab your copy today.
Featured Video