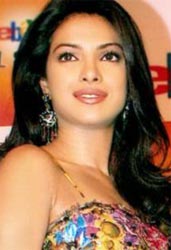 bagged the award last year for her role as a supermodel in Bhandarkar's Fashion, it was the de-glammed role as a Marathi mulgi in Kaminey, that secured Priyanka's nomination for the second year running.

The 5th Apsara Film and Television Producers Guild Awards for 2009 are slated to be held on 8th Jan 2010, with blockbusters Love Aaj Kal, Ghajini, Wake Up Sid and Kaminey ruling the list of nominations.