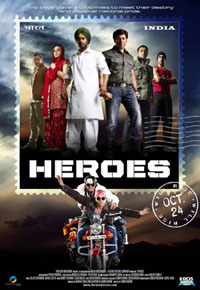 the 2004 cult classic Diarios De Motocicleta (The Motorcycles Diaries) which in turn is adapted from the journals of Ch' Guevara, the leader of the Cuban Revolution, in which Guevara, recounts adventures he and Alberto Granado, his best friend, had while crossing South America on a motorcycle in the early 1950s.


It is the story of two bosom pals -- Sammy (Sohail Khan) and Ali (Vatsal Seth). Everything they do, they do together and are highly dependent on each other. While Sammy is an eccentric, high-spirited and has an uncanny knack of finding humor in the weirdest of situations, Ali is quieter and more mature. When the two friends travel a thousand miles to deliver three letters as a part of their film school assignment, little do they know that the journey that they have embarked on will give them a new meaning of life.


During their road trip from Delhi to Chandigarh and then from Manali to Ladakh, Sammy and Ali come across real life characters played by Salman Khan, Preity Zinta, Sunny Deol and Bobby Deol who leave a life changing impact in these two youngsters' lives. 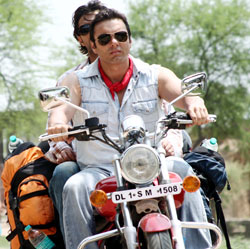 
For the first time macho man Salman Khan will be seen in a Sikh makeover, a Jatt Sikh with a beautifully tied turban. The actor grew his beard for three weeks before the filming for an authentic bearded Sikh look.


Two pairs of real life brothers -- Salman and Sohail, Sunny and Bobby feature together in the film.


Preity Zinta, who features in a village Mutiar makeover, took a refreshers course in acting from Anupam Kher's acting school to brush up her skills for a deglamorised role of a timid wife, a first for the bubbly actress.


The film, shot in Ladakh, Chandigarh and Delhi, is due for release on October 24.