The honour would be bestowed upon her at a grand ceremony at National Center for the Performing Arts (NCPA), Mumbai, on August 12. Prime Minister Dr. Manmohan Singh, Congress leader Sonia Gandhi, Union Minister of External Affairs Pranab Mukherjee, and Maharashtra Chief Minister Vilasrao Deshmukh are expected to grace the occasion. Only recently, the actress had received an honorary doctorate from Leeds Metropolitan University in the UK.

"To be a worldwide achiever at such a young age and to be bestowed with flattering accolades, is a matter of utmost prestige for Shilpa. She is extremely grateful to be chosen for this honour," said Dale Bhagwagar, the actress's spokesperson and publicist.

The award, approved by the Government of India, was instituted by the Bureau of Indian Standards in 1991 to give special recognition to leaders of the quality movement and encourage manufacturing and service organizations that strive for excellence in the country.

The award has been designed on the lines of the Malcolm Baldrige National Quality Award in USA, Deming Prize in Japan and the European Quality Award.

From fighting Covid to no tantrums, Shilpa Shetty’s birthday note for ... 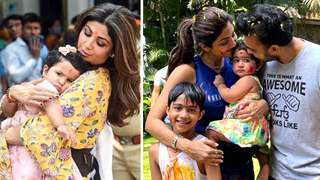