View Profile
Once upon a time Amitabh Bachchan had the total copyright over the anger matters. Later on heroes like Sunny D 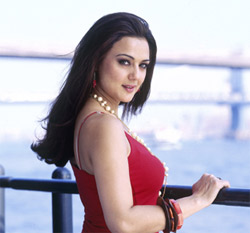 Featured Video
eol and Ajay Devgan shared few bits of the losing control. On screen sweeties like Salman and Chichi have even created off screen hunguma either by knocking ladies’ doors or by slapping news guys. But sweet babies ire-ing and firing in the industry is quite an offbeat catch.

Though hard to believe but it’s true that it hardly takes few seconds to ignite anger in Priety. We all are aware of this tamed lioness’ angry side. Once this pretty actress gets angry then she is not the one who would back out from the fight.

Recently producer Tito Juneja’s son Sonny Juneja had to face the storm from this lady when he dared to throw comment on Priety’s acting capabilities while she was dubbing for Tito’s film Har Pal.

Priety got so bugged up with the continuous comments from Sonny that she decided to quit dubbing session and took a seat in a nearby park. In the end director Jahnu Barua had to arrive on the sets to convince the angry actress for resuming the dubbing. Preity did so but only after Sonny was asked to leave the studio. Whether reports of cold vibes between films cast Shiney Ahuja and Preity Zinta or Shiney’s balding problems, Har Pal has always been associated with these kinds of negative stories. But as you say in Bollywood, negative or positive, B-town personalities always welcome free publicity. Maybe the uncontrollable anger fuming in the babe is just a part of that!