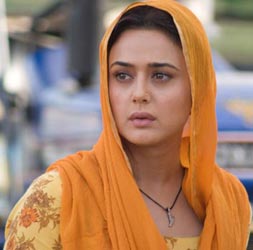 Actors are defined by the roles they place on screen and off screen and after successfully representing Punjab at the IPL with her KING's IX team, Preity Zinta can now be seen in a role never attempted before with Heroes. Preity plays Salman’s war widow –the sole winner of the family who single-handedly strives to bring up her son and keep the home fires burning. Being the perfectionist  Preity made a dedicated choice to go back to acting school and learn how to portray the character of a rustic Punjabi woman. Anupam Kher tutored her on how to imbibe the dialect and body language.
Samir Says, “Priety who is known for her bubbly, enthusiastic self worked on her body language and observed the locals there to portray the demure, silent but strong woman that her character is in the film. If you ask me, I think this is one of her best performances to date.” This method acting transcended onto the set as her introduction in the film is on a tractor and this achievement as another first for the feisty lady but with the help of Salman and a few assistants she mastered the skill of being in control of the tractor.
Samir says “In the scene Preity is driving a tractor, she was very nervous but she pulled it off with easy driving a full circle of the field and bringing it to a stop only a few feet away from Sohail, Vatsal and Dwij. Even though she had control over the tractor every time I shouted cut people from the crew would run to help her stop the thing, and every time she would stop it get off and give a look as though what are you doing here I got it under control. She was super!” Her co stars fondly remember her support and encouragement and vouch for her complete dedication.

Looks like Preity is winning more than the hearts of Punjab!! We are sure Heroes will add another feather to her multifaceted cap.