View Profile
The stunning Preity Zinta has been much out of the public eye, especially since she has had no recent Bollywood releases. Zinta was last seen in Heroes back in 2008 and she also played a song cameo in Rab Ne Bana Di Jodi. The Kings XI co-owner will now be seen doing an item number, 'Happening' in the much-awaited Salman and Kareena starrer, Main aur Mrs. Khanna. 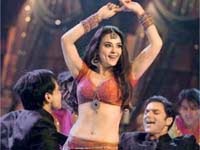 Featured Video
rumours have it right, the bubbly girl has been quite serious about this item number. She had been rehearsing with ace choreographer, Farah Khan for approximately 10 days prior to shooting the song. It is said that Preity practised for about 3 hours a day and she was also on special diet. Not to forget, the stunning beauty worked out, did yoga and also took swimming lessons to get in shape for the song sequence.


The song is said to have cost riches as it was a last minute addition to the film. The theatre in which the song was shot cost plenty to rent and furthermore, the whole cast and crew were expected to travel to the setting. The song is set in an open theatre located in the heart of Dubai. The song is definitely expected to come onto your music hitlist and for most, it will help diminish Preity's bubbly and serious image!


Preity will next be seen in Har Pal starring Shiney Ahuja which is in post-production mode. However due to the allegations imposed on Shiney, there is no confirmed release date of the movie as of now.