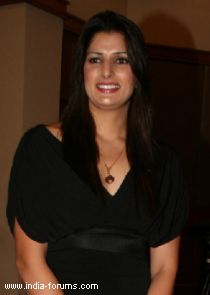 She will exit the show in Monday's episode on the channel Colors, said a statement from the TV channel.

Sonika, the daughter of renowned wrestler Chandgi Ram, is six months pregnant. Her entry on the controversial reality show Oct 2 raised concerns about her health, which could have been affected by the topsy-turvy schedules.

But given the recent ups and downs and the turbulent environment in the 'Bigg Boss 5' house, thanks to a war of words between VJ Pooja Misrra and other housemates, she was offered the opportunity to leave the show and return home.

Sonika was overjoyed at the prospect and announced that she was going home to live peacefully with her husband and family.

Though she was beaming with joy upon her exit, her fellow contestants bid her a tearful farewell and gave her their good wishes, said a source.

As Sonika chose to exit the show, actor Amar Upadhyay will be the new entry Monday.

'Bigg Boss 5' started with 14 contestants, locked inside a house, without any connection with the outside world.