Sanjay Leela Bhansali has signed on late actress Smita Patil's son Prateik Babbar for his next production 'My Friend Pinto' that will go on floors later this year. And the youngster is naturally delighted. 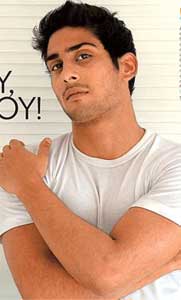 Featured Video
a privilege to be working with Mr.Bhansali. When I met him I was amazed to find out how normal he is in spite of being an artist of such a high calibre,' Prateik told IANS.


'My Friend Pinto' will be directed by Raghav Dar, who assisted Mani Ratnam during 'Guru' and then served as associate director on Abbas Tyrewala's 'Jaane Tu...Ya Jaane Na'. That's when Dar and Prateik got to know each other.


'My Friend Pinto' would be Prateik's first author-backed title role. He had a captivating cameo in 'Jaane Tu...Ya Jaane Na' and his second film 'Dhobi Ghat' apparently has Aamir Khan playing the lead.


Prateik's aunt Manya Patil is thrilled by the progress he is making.


'When Abbas Tyrewala told me about the role in 'Jaane Tu ...Ya Jaane Na', I wasn't so sure. It sounded like a small role. But Abbas told me to trust him. And that the role was tailormade for Prateik. To his credit, the role turned out exactly the way it was narrated. I'm glad Prateik's career is working out.


'Today, there is room for all kinds of cinema. And like his mom, we want Prateik to be adventurous in his choices. I'm there to guide him, though I'm not really part of the film industry,' said the proud aunt.


Speaking on Prateik's life as a child since he lost his mother when he was born, Manya said: 'Actually Prateik has so many self-appointed mothers including my mother, my elder sister Anita and me, of course.'