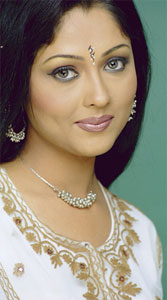 Praachi Thakker, wife of popular actor Pankit Thakker is back to television after a hiatus with a cameo in 9X's Jai Maa Vaishno Devi…

Praachi who had essayed the role of Rakhi, Anurag Basu's sister in Kasautii Zindagi Ki had taken a break from television after her child's birth. She was also seen in Sahara One's Kaagaz Ki Kashti and Tamanna on Doordarshan.

We immediately buzzed Praachi to know more on her role. "Yes I have been approached for the role, but cannot divulge details as of now", quips the actress. When asked whether she is back to take up major roles, she says, “Yes, I will surely consider if I get something good”.

and lucky to have a cute, cuddly husband! lool hehehehe

13 years ago yup atuls wife! she was in kasauti as far as i remember

13 years ago @gaurifan -He plays Dr.Atul in Dill Mill Gaye