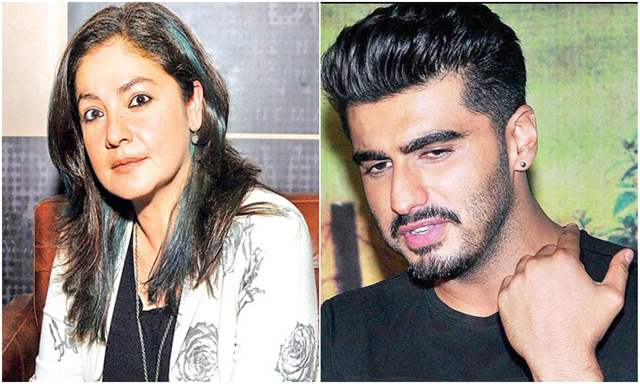 On Thursday night, Republic TV editor in chief Arnab Goswami discussed the demolition of Kangana Ranaut's office by the BMC on his prime time show. While condemning the act by the BMC, the journalist went on to discuss several other instances where Bollywood celebrities escaped BMC atrocities despite illegal constructions.

During the prime time debate, the journalist referred to Arjun Kapoor as 'a small time actor’, and claimed that hee doesn't know ‘who that person is’.

Arnab Goswami's comments have gone viral on social media leading to a lot of flak as well. Filmmaker Hansal Mehta hit back against his remarks and wrote on Twitter:

“Nobody is a ‘small-time’ actor. Get that straight f******d arnab. Enough of this demeaning and abuse of our profession."

“I agree with @mehtahansal when he says ‘Nobody is a small time actor’. People use terms like the above & ‘out of work’ actor, ‘B’ or ‘C’ grade actor as a means to dismiss & degrade.The joy & trial of being an actor/artist is that at some point you are going to be out of work."

Pooja added: “That’s what makes ALL artistes across board such courageous people. To constantly embrace uncertainty,to plod on & put your best face forward even after enduring failure. To follow your heart & hone your art no matter how average or brilliant people think you are-that takes guts!"

In another tweet, Pooja lauded her colleagues and called them warriors. “So here’s to the artists,the makers,the entertainers,the believers. We are warriors! Our tools are our hearts, our senses. Our strength is our vulnerability,our capacity to fall & rise again. Success is temporary,failure guaranteed & we still do what we do. Not everyone’s cup of tea!"

After a month, Arjun Kapoor tests negative for Coronavirus

sanyoprithviraj 1 months ago the same was said for sushant by rajdeep, then nobody retaliated like this. for arjun everybody is coming out, he does not even have that many hits as sushant had and no critical acclaim also

simplyme 1 months ago Are people blind?! When sushant died every body gave their condolences!! And within 24hrs Kangana charged on entire Bollywood!!! If they had spoken a word then this same public would have attacked them!!! It’s crazy how people just don’t choose to see the truth!! Now Arjun is being dragged for no reason!!! He is alive and if I, you or anyone with tiny ounce of brain would see what is happening they would stand up for him!! They did stand up for Taapsee and Swara who btw are not “nepotistic “!!! Out of all this hoolaboo I feel so sorry for Sushant!! They have made his death a circus!! Poor soul could not find peace even after his death!!!!

Rosalinesak 1 months ago So much love between nepotism kiddos...

zee112 1 months ago All these bollywood stars and families coming to support each other but no-one is raising their voice for justice for Sushant. Why?