Bollywood hunk John Abraham is playing himself in 'Fillum City' and says it is tougher than doing other roles. 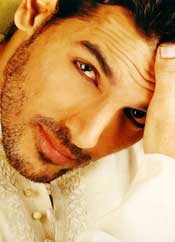 Featured Video
'I'm playing John Abraham. And believe you me, it's not easy. I keep looking for myself in the character and find there are so many things that I want to keep for myself. I'm trying to act and dress as I do in real life. It's tough because you're constantly trying to 'act' like yourself,' John told IANS.


The film is being made by debutant director Deven Khote.


John is also not happy with reports about him signing an international project. He wishes people wouldn't put out misinformation about him.


'I believe websites have put out stories that I'm doing an international film called 'American Empire'. I haven't even read the script. So where's the question of my doing it? Doing international films isn't a burning ambition for me,' he said.


Though an enthusiastic voter, John couldn't be part of Karan Johar's short-film featuring most of Bollywood's youth icons to promote voting awareness. But he is hoping to team up with the Karan and director Tarun Mansukhani in the second instalment of 'Dostana'.


'Would you believe I was part of that project from the start. I sat with the director Tarun Mansukhani and Karan and we discussed the idea. But on the day we were to shoot, I was down with a viral fever. I'd have loved to work with Tarun. He's a wonderful boy. Hopefully, we'll be doing the 'Dostana' sequel shortly,' he said.