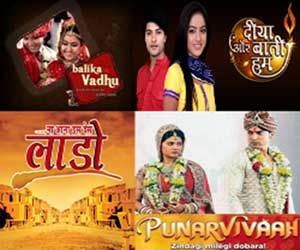 Television is regarded as a strong media platform, which is responsible for bringing about social change in our society. New concepts having an added blend of social message along with entertainment, are hitting the small screen on a wide scale now a days. Even the TV channels have now introduced themselves with their new slogans.

The TV shows are not being aired just for entertaining people these days, but they are also being aired with a good motive to bring about a positive change in our society. The shows being aired on Colors like Balika Vadhu, Na Aana Is Desh Laado, etc. are encompassing strong social massages by throwing light on the social evils existing in our society.

Zee TV's show 'Phir Subah Hogi' is going to be a show which is based on the real life stories of the Bedia tribe of the Bundelkhand region wherein the girls are forced to dance before the Thakurs (landlords) to earn money.

Punar Vivah being aired on the same channel is also helping to change the mindsets of the people with their tagline 'Zindagi Milegi Dobaara'. Likewise all these channels, the Star Plus shows are also contributing their best in bringing about a positive change in our society having the tagline of 'Nayi Soch' in them.

We spoke to Anas Rashid aka Sooraj Rathi of Diya Aur Baati Hum about if the character of 'nayi soch' being played by him is going to change the mindsets of the audience. He replied, "Yes, why not! The character being played by me is definitely going to bring about a positive change in the mindsets of the audience. According to the current track, Sooraj hates Sandhya but the audience is well aware about his feelings towards Sandhya and the intention behind his actions. He is an ideal life partner and people would like to emulate him."

Such shows are also gaining a lot of TRPs for themselves as well, because along with doing good to our society, they are also entertaining the audience with their package full of entertainment. The producers, who have taken up this initiative to bring such great concepts before the audience, truly deserve applause. Having such good concepts being aired on television, we can surely say that 'Phir Subah Hogi'.

ahsan959 6 years ago Nice thread ... I like the show Phir Subha Hogyi and I wished to see such more serials from the same couple Sugni & Vikram Singh ...

suju19 8 years ago Punar vivah Rocks. We love it to the core and we love Gurmeet and Ks for their fantastic performance.

KamliKudi 8 years ago Love PV- GC and KS are doing an awesome job :)

IamaPCmaniac 8 years ago agree, and especially nowadays zee tv is doing great with such concepts

bbbccc 8 years ago I don't have Star so don't know about DABH, but love Punar Vivah. The characters are very strong and actors are amazing

Mandana Karimi and Radhika Apte come out in support of ...
40 minutes ago