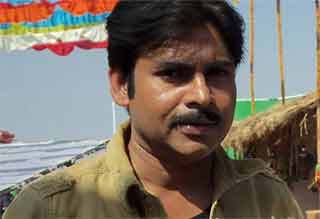 Actor Pawan Kalyan, who plays Lord Krishna in the Telugu remake of "OMG! Oh My God" titled "Gopala Gopala", will be seen for 25 minutes in the film. He started shooting for the film here Monday.

While Pawan will be reprising Akshay Kumar's role from the original, actor Daggubati Venkatesh will step into the shoes of Paresh Rawal.

"Pawan started shooting from yesterday (Monday). His role is limited to 25 minutes in the film, but the scenes featuring him will be a laugh riot. Scenes between him and Venkatesh will definitely be loved by the audiences," film's director Kishore Kumar told IANS.

Venkatesh said that he's excited to be sharing screen space with Pawan.

"I'm really looking forward to 'Gopala Gopala'. Pawan and I are working together for the first time and I'm as excited about it as our fans. Both of us have some wonderful dialogues and I'm sure audiences are going to love it," Venkatesh had told IANS earlier.

The film, which is expected to hit theatres during Sankranti 2015, also features Shriya Saran, Mithun Chakraborty and Murli Sharma in important roles.