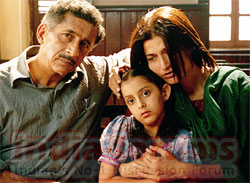 After months of speculation, controversy and debate, President Pratibha Patil finally handed over the most prestigious award in Indian Cinema to the film maker of 'Parzania' - a swarna kamal and cash prize of rupees fifty thousand.

The controversial 'Parzania', based on the 2002 sectarian violence in Gujarat, earned the best direction award for Rahul Dholakia and the best actress award for Sarika for "her rendition of a crusading mother who fights for justice against all adversity in a communally charged environment".

Having won two National Awards, the producers of the film, K.B. Sareen, Kamal Patel and Rahul Dholakia, have decided to dub the film in Hindi and then in Gujarati- "This will help so many more people see the film in different parts of India," says Sareen,
Featured Video

who is also the Indian Distributor of the film.

Co-producer Kamal Patel, who is in New Jersey, is delighted with the two awards, and says, "It is a great honour to win two awards in the highest categories, despite competition from films like 'Black', 'RDB', 'Apharan', etc. "

On winning the award, Dholakia said, "This is a victory for indie cinema and I have to thank every member- cast and crew as they all stood by 'Parzania' and gave it their best regardless of all the obstacles and hurdles. Now we only hope Dara finds his son."

Rahul's parents, Parry and Raksha Dholakia, specially flew down from Los Angeles to be with their son on his big day. Rahul acknowledged his parents, and said, "My parents have sacrificed a lot for me, and I think this ceremony would be incomplete without them." Rahul also went on stage to receive Naseeruddin Shah's award for Best Supporting Actor.