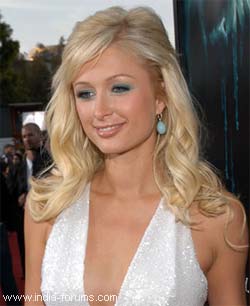 Mumbai, Sep 26 If Bipasha Basu is to be believed, Paris Hilton is quite a 'party girl'.

'Had a crazy fun night out after ages! Let my hair down a bit! Paris Hilton is a total party girl!' tweeted Bipasha.

The actress was among the few Bollywood celebrities who attended the bash organised by Queenie Singh for the international socialite in Mumbai Saturday night.

Though many actors like Sonakshi Sinha, Neil Nitin Mukesh, Abhay Deol, Arjun Rampal, Dino Morea and Imran Khan were expected for the party, the only knows names to have turned up included Bipasha, Sushmita Sen and Kangana Ranaut.

Bollywood star Akshay Kumar, who had once stirred up controversy by asking his wife to unbutton his jeans at a fashion show, hopes to feature on the cover of Playboy magazine someday.

When actress Preity Zinta asked Akshay on her chat show 'Up, Close and Personal with PZ' whether he would be ready to pose for a magazine like Playboy, Akshay said: 'I will only pose for Playboy when they have men on the cover.'

The international magazine is famous for its semi-nude and nude contents.