Mumbai, June 17 (IANS) After proving his mettle in Bollywood, versatile actor Paresh Rawal is now getting ready to do his first international film.

'It's called 'The Virgin Goat'. It is a lovely script. I play a villager who is taking his goat-on-heat for mating. It's entirely the story of my character,' Paresh told IANS.

It's rumoured that Paresh has asked fo 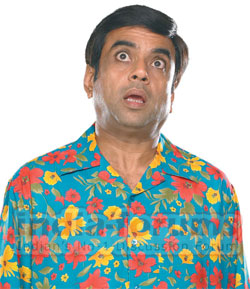 Featured Video
r an exorbitant amount of money for the role.

'Please believe me, I'm asking for less than I deserve. I'm not comparing my price to what others get. I'm only charging more as compared with what I used to charge earlier.

'Boney Kapoor openly told me once that I charge too little. Sometimes I ask for more than I normally would just to fob off unwanted projects.'

The talented actor had been in the news for his comment on Mallika Sherawat who plays his wife in Sanjay Chhel's 'Maan Gaye Mughal-e-Azam'.

The two got along like a house on fire during the shooting of the film and Paresh made the classic statement on the sets of 'Maan Gaye Mughal-e-Azam', 'Mallika is largely responsible for global warming.'

Laughs Paresh, 'Ha, I did say that. I don't deny it, but only as a joke. I'm constantly passing quips on the sets. And this was one of them. Little did I know that it would be the talk of the town! I've just landed in Mumbai and everyone is asking me about it.'

Paresh plays a middle-aged man whose son is looking for a suitable match in 'Mere Baap Pehle Aap'. And amused friends are now suggesting Mallika could be the cause of some domestic warming in Paresh's life.

Laughs Paresh, 'Nothing like that. My wife (actress Sawroop Sampat) heard my comment and she laughed the loudest.'