While the fans of Karan Singh Grover have not yet finished partying after getting their handsome hunk back again in Star One's Dill Mil Gaye, there comes this news that the show will get back its original Riddhima i.e. Shilpa Anand. 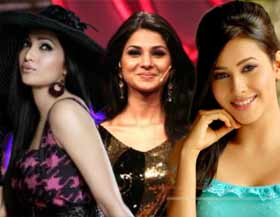 For the uninitiated, Shilpa Anand and Karan Singh Grover shared an amazing on screen chemistry earlier, after which Shilpa was replaced by Sukirti Khandpal. After the stint of Sukirti as Riddhima, came in Jennifer Winget.

And now it looks as though there is every chance of Shilpa Anand getting back her prized role. And the reason stated is that Jennifer Winget's contract apparently ends in April, and the actress has expressed her desire not to renew it any further.

Our source also tells us that, "It is not only Shilpa Anand who has been approached. Panchi Bora who was last seen in Kayamath is also in talks with the production house for the role of Riddhima. However, a decision has not been taken by the production house and channel".

When we questioned Jennifer about her contract expiring, she said, "I don't know from where these rumours are coming up. My contract is not ending in April, and I am not leaving DMG".

Shilpa Anand on her part confirmed that, "Yes, the production house approached me thro' one of my friends, to get back as Riddhima. I have accepted the offer and have sent them my quotation. They have to get back to me now".

We contacted Panchi Bora who said, "Yes, I have been approached for Dill Mil Gaye. As of now, I am in Australia and will be talking to them once I get back".

We now wonder whether the 'suspense' factor that is always a part of all DMG news is actually its USP!

+ 5
9 years ago Shilpa Anand as Dr.Riddhima Gupta in DMG3 Sirf KaSh as AR in DILL MILL GAYYE 3 for eternity :x:x:x...Old Is Gold n everything old is most precious than than any copy;)...Shilpa Anand as Riddhima in DMG 3...

K A S H For Eternity

Nimimalik 9 years ago only shilpa anand is perfect for dr.riddhma's roll so we want shilpa as dr.ridhma

10 years ago KaSh has been the most magical and best chemistry on the indian television yet...not one can ever beat that spark...

+ 3
10 years ago yah but wanted as Dr. Riddhima Basket Gupta not as Dr. Shilpa Malhotra.

DHRUVITAPATEL7 10 years ago you are just rocking in western dresse love you so much . god bless you.