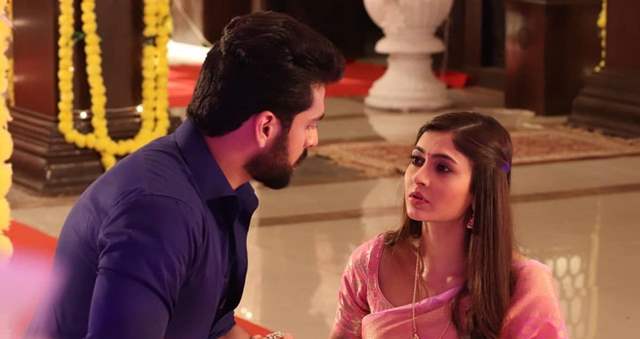 Star Plus show ‘Mehndi Hai Rachne Wali’ is getting quite interesting with each passing episode. The current track of the show revolves around Sunny and Keerti getting married against the wish of the family. Rao family is mighty upset with her. They’ve decided to not accept Sunny as the member of the family.

In the upcoming episode, during Ganpati pooja, the family makes Sunny feel left out and doesn’t include him in the aarti. This irks Sunny but Keerti consoles him and asks him to ignore the family. Jaya also ignores Sunny during the rituals. Pallavi doesn’t give prasad to Sunny which makes him angry and he confront Pallavi. Pallavi states that pooja’s sweets aren’t for criminals. Sunny asks her to look out for her husband and his illegal business.

Pallavi shows her trust in Raghav. Sunny reveals to her that Raghav doesn’t pay custom duty and is indulged in the illegal smuggling of diamonds. Pallavi still stands by her trust. She challenges him to prove the allegations and if he proves the same, she will do whatever he would say. Sunny tells him that if he wins the challenge she will have to slap Raghav infront of everyone.

As per a ritual, Raghav and Pallavi feed each other pooja’s sweet. Amruta and Farhaad indulge in cute banters. Sunny overhears Farhaad talking about maintaining a register in which he writes about the custom duty that they save and the commission that they pay to the dealers. Sunny plans to find out the register and show it to Pallavi.

Furthermore, Sunny ends up at Raghav’s study room and searches for the register. A female police officer comes at Rao mansion and states that she has to talk to Raghav as the matter is huge.

2 months ago Hope Raghav and Pallavi will bounce back soon

2 months ago Love Sai Ketan Rao aka Raghav Rao and for him will put up with anything (I hope) . Shivangi Khedkar aka Pallavi and Raghav Rao together should just wipe that sunny played very well by Kushagre Dua off the face of the earth. Mehndi Hai Rachne Waali is good show and the only show worth on Star Plus.

2 months ago We love Sai Ketan Rao and Shivangi Khedkar as Raghav Rao and Pallavi Sawant Rao. We hope the story focuses more on them and less on side characters. Mehndi Hai Rachne Waali