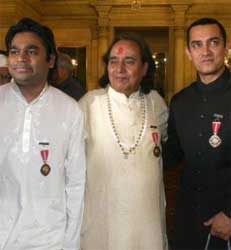 Music maestro A.R. Rahman, acclaimed actor Amir Khan, and noted vocalist Pt. Channu Lal Misra were present at the grand ceremony held in the Ashoka Hall of the Indian President house, Rashtrapati Bhawan in national capital, New Delhi on 31st March. The three were conferred upon by President Pratibha Patil herself, with the second highest Indian civilian award Padma Vibhushan for prominent contributions to their respective fields of entertainment.

Huma Qureshi Loses Cool; Says She has been 'Unnecessarily ...
7 minutes ago

2020 is Turing Out to be a Fruitful Year for Prabhas!
7 minutes ago