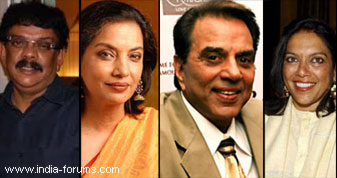 For most of their friends in the film industry, the Padma Shri for the prolific director Priyadarsan and the Padma Bhushan for illustrious actress Shabana Azmi, veteran actor Dharmendra and acclaimed filmmaker Mira Nair have come a little late. But they are happy and content.

Priyadarsan feels this is the best time he could receive an award of such repute.

"Why do you feel it's come too late? Everything happens at the right time. Until a few years back, I hadn't received a single national award. Then I got it for 'Kancheevaram', which many consider my career's best. But I feel every recognition comes when it is meant to come," he said.

"The Padma Shri is important for me at this juncture because I'm not in a space where I make both kinds of films, the artistic and the commercial. If I am proud of 'Kancheevaram', I'm also not ashamed of 'De Dana Dan'.

"It's the so-called slapstick comedies that have given me the freedom to make the other kind of films. I'll continue making both kinds of films. I've treated every failure as a means to correct myself and every success as a means to better myself. There is no respite from work for me. As I speak to you I am editing my new film 'Tezz'," he added.

Priyadarsan is happy that Dharmendra and Shabana Azmi have been given the Padma Bhushan.

"I've watched their films from the time when I was young. It's actors like them who inspired me to become a filmmaker. I'd love to direct both of them," he said.

"What really tickles me is that my husband Javed Akhtar and I both are Padma Bhushans now. So we are Mr. and Mrs. Padma Bhushan. Did this honour come too late? I don't think so. For an artist, recognition at any time is welcome. This is what my parents and my acting teacher Roshan Taneja have taught me. An artist never works for an award. And when it comes, she accepts it gracefully. And this comes from the government of India, so it's a double honour," she said.

Dharmendra, whose wife Hema Malini and youngest daughter Ahana felt the award is a tad delayed, is overwhelmed with the award.

"Recognition has started coming a little too late in my career. I am happy. Very happy. But more than me, it's family and well-wishers who are happy for me. Ever since the announcement was made my phone has not stopped ringing. People are dropping in to express their joy. So the greatest award for me will always be the love of the people. I will continue to try to do good work," he said.

Reacting to the winners this year, Padma Shri actor Kamal Haasan said: "Some of the winners are my seniors whom I am very fond of. The rest are my friends. I feel very proud of them. As someone who has always admired their work, I am happy the government too has acknowledged their contribution."