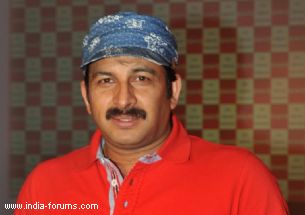 For some he is an "outsider" and for some he is a popular figure, but to Manoj Tiwari, BJP candidate for North East Delhi constituency, these people are his "own". The Bhojpuri actor-turned politician is confident of writing a new chapter of development in this "neglected" constituency that has the highest concentration of migrants from eastern Uttar Pradesh and Bihar.

Needless to say, the singer and superstar of Bhojpuri cinema doesn't need an introduction in this area where huge hoardings of Tiwari, wearing lime green shirt, along with BJP prime ministerial candidate Narendra Modi announce his candidature from the constituency that was carved out of east Delhi in 2008, post the delimitation exercise.

In the absence of any motorcade or cavalcade swarming around the 41-year-old Tiwari, his star power is enough to attract local residents who smile, try to shake hands, shout and hoot the moment his BJP-poster adorned car passes by, and the actor reciprocates with equal warmth.

"They are my own people and unfortunately this constituency has been getting step-motherly treatment from the previous government. I want to connect with them directly and not have any air of being a star while I campaign," a visibly-tired looking Tiwari told IANS en route to Timarpur Mandal where he had a road show scheduled.

"There is no government hospital, recreational park, school or colleges in North East Delhi. I would first like to focus on these issues and then take on issues like traffic jams, sewerage problem, public transportation and water and electricity," he added, saying he was ready to wear the "crown of thorns" to make their lives better.

Tiwari, clad in a turquoise cotton kurta and jeans, started the road show by walking through narrow alleys of Timarpur area where an army of men and boys surrounded him, and women and girls cheered from their balconies and perched upon planks of grocery shops.

With heavy drum beats absorbing all other sounds, the only thing one could hear amid this celebration was "Manoj Tiwari ki jai ho" and the actor assured his supporters to have faith in him for a better future.

"I want to write a new story. People believe that actors can't think and there have been some actors who haven't done credible work. But, I have always felt miserable to see the apathy of leaders towards people, and I thought if I had to bring change, I have to be a part of politics," Tiwari said to his supporters, who are mostly factory workers and labourers.

In the last Lok Sabha elections, Tiwari was associated with Samajwadi Party and had lost miserably from the Gorakphur seat.

Even though there is 25-27 percent of Muslim population in this seventh Lok Sabha constituency, the high concentration of poorvanchali (migrants from eastern Uttar Pradesh and Bihar) would have been a factor in the BJP fielding him from here to cash in on his "stardom" and "popularity".

"I will vote for him because he too is from Bihar just like me," Lalita Kalu, a housewife who is now settled in Dayalpur, told IANS.

"I watch his movies on a Bhojpuri channel. I don't know if he can bring in some change or not, but the fact that he comes from my state is a good reason for me to vote for him," she added.

Though, there are many who think he stands very little chance over Congress' Jai Prakash Aggarwal and AAP's Anand Kumar.

"He is an outsider. Why should I vote for him?" asked Anil Kumar, who runs a mobile repairing shop in one of the dingy lanes of this area.

"We want someone who is a local and who is approachable. When we need to discuss any issue and problem where will we find the star hero? I have been living in Delhi since 70's and I have seen very little change in this area," he added.

As the sound of beating drums fade into oblivion, Rajpal Sharma, a dry cleaner breaks the silence.

"We want BJP to win, and I don't care who is the candidate. We have had Congress for 10 years and it is time for change," Sharma told IANS.