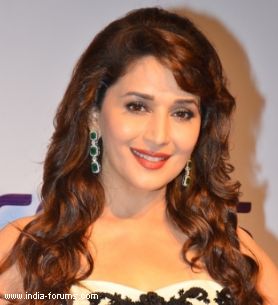 She has impressed Bollywood buffs with her versatility and acting ability through the years, but it is dance that keeps Madhuri Dixit going. The actress, who gave a new dimension to her passion by launching an online dance academy, says its success has now encouraged her to plan an on-ground institute.

"We do have plans to take the online dance academy on-ground. We decided to go digital first as it was a way to reach out to a whole lot of people from around the globe. We're in the planning stages of coming up with an on-ground dance institute," Madhuri told IANS over phone from Mumbai.

Her online dance academy DancewithMadhuri.com was launched in February 2013, and it was gradually launched as a mobile App.

The actress, a trained Kathak dancer, was happy the platform has emerged as a "community".

"We realised we could spread the joy of dancing easily via the digital medium and as many as 100,000 people are enrolled. Besides, it's easy - you can be carrying a smartphone always and learning dance at any time of the day and anywhere.

"You can be sharing and uploading your videos, and earning incentives and badges. It's a community, really," added the mother of two, who became Bollywood's box office queen in the 1990s courtesy films like "Dil", "Saajan", "Beta", "Khalnayak" and "Hum Aapke Hain Koun!" and "Dil To Pagal Hai".

Where there is dance, there is Madhuri.

While the plans for extending her dance-based venture are still on her mind, what's keeping her occupied is the new season of dance reality show "Jhalak Dikhhla Jaa", where celebrities, paired with a professional choreographer each, compete with one another.

Judging the show for the fourth time in a row, the 47-year-old is excited about the new twists, additions, innovations and the contestant line-up this season, which will be co-judged by filmmaker Karan Johar, choreographer-director Remo D'Souza and for the first time, Maksim Chmerkovskiy, Ukranian dancer and winner of "Dancing With The Stars 2014".

"We will be strict this time! Getting eight, nine and 10 on the scoreboard won't be easy any more! But I will give my opinion on whatever good I see.

"Also, since we have a new judge Maksim, a Latin ballroom dancer, it will be interesting to know his take on the contestants' dance," she said, sounding upbeat about the show, which goes live Saturday on Sony Entertainment Television.

Madhuri says viewers should watch out for some interesting challenges and surprises that will be thrown at the contestants, which range from former cricketer S. Sreesanth to a dancer par excellence a la Shakti Mohan. The line-up also includes a host of actors.

"They will dance with holograms, with cutting-edge technology; we'll switch choreographers some day; we may have a vertical wall...all of that...and a Lie-o-meter on the sets for fun," she said, barely able to contain her excitement.

What about the film front?

After her comeback projects "Dedh Ishqiya" and "Gulaab Gang", her fans want more of her.