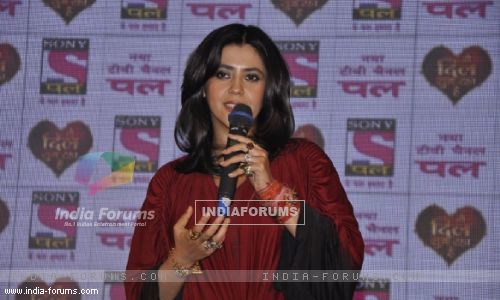 Sony Pal's Yeh Dil Sun Raha Hai is all set to hit the TV screens soon. While the concept of the show looks fresh, it strikes a right chord with the masses and will be appreciated by the viewers  for the chemistry of Arjun Singh (Navi Bhangu) and Purvi Sharma (Aparna Dixit) in the show.

Well in this chat with the highly acclaimed producer of the show Ekta Kapoor, she speaks about the show, bringing shows with the popular lyrics of songs and more with us...

What message do you want to share through this show Yeh Dil Sun Raha Hai?

My message through this show will be one thing that can only change you is love. The beauty of the love is that however strange you are, love makes you familiar to each other. Love has the power to transform you.

Tell us something about the concept of the show?

I have never done shows outside my space that is the relationship between the small town people.  The concept deals with the conservative and orthodox meantality of the small town people which is still prevalent in our country though the families belong from a well educated back ground. There are two families Singh and Sharma in which one family is rich and belonging from the affluent class however, they are conserved with their thoughts. Though they have down standards, the differentiation between daughter and son which is still prevalent in our country is highlighted.

Also the point of equality has been touched upon in the show as the Sharma family which is though middle class but treats everyone equally. It is the story is about two people who come from very different world in spite being crime, bureaucracy on the rise in the town, these two people end up fall in love.

What made you to come up with a show like Yeh Dil Sun Raha Hai?

I wanted to do something new and this is the show based on the small town people but I have personally not done any so it was very new for me. I have heard stories about rich family in small towns who has so much money that their lifestyle and thinking is that rigid that no one can say 'No' to them. And there are small houses in the same town where women are allowed to gain knowledge but are neglected for sharing their views and opinions and are asked to wear sarees and doing household chores at home.

So through this show I want to break such mentality and explore a romance between two very different people who have different upbringing in their life.

The name of the leads which is Arjun and Purvi is the same from the previous show Pavitra Rishta. So what do you have to say about the same?

Are you planning to direct any serial or movie in the near future?

No, I don't have that talent and time for directing any show so I don't think that I will ever try for the same.

How has your journey been in television so far?

My journey is full of ups and downs. It is much of learning process and the interesting thing is at the end of the day you give so many interviews but you are not aware of which show will work and which show will not work. So today I don't know which show will work but its just that you put in your best with certain amount of belief and leave the rest to universe.

Earlier in your shows the letter K was most prominent factor and now with Ajeeb Dastaan... and Yeh Dil Sun Raha Hai it seem to have changed and gone on the lyrical base of the films. So what do you have to say about it?

People are telling me that you have shifted the focus from the factor 'K'  and has changed it to the lyrics of the songs but it's not easy as 'K' was almost a brand association. People used to take it for granted that whichever show had the initial K it was Ekta Kapoor's show. To acquire the copyright of the title of the show and to promote the show you need to invest a lot and now since the time has changed the strategy is to make the title very catch and attractive.  Until and unless you have a lyrical association to the show how will people remember it? So titles have to be catchy as there are 100-150 shows on TV these days.

You are bringing your show on a new channel Sony Pal, what do you have to say?

Anooj Kapoor Sir has done such a good job with his comedy channel SAB TV and I personally believe that every channel was new at some point of time and every show when you create has same amount of pure work in it, so how one can decide if the channel will do well or will not do well. Our job is to give the channel our best show. As it is coming from me it has to be best from my abilities.

6 years ago Ekta mam we r thankful to u to give such a wonderful couple ...AshVik"dey r the best!!!nevertheless dey will always be the one n only ArVi forever!!!Instead of giving a tribute to them ,why don't u give them a chance in ur creations...I mean hit films and shows.
AshVik /Arvi is our life!!!!!

6 years ago Ekta you can name as many character as Arjun and Purvi but no one can be Arvi as only Rithvik Dhanjani and Asha Negi is and will always be our Arvi and Ashvik.

6 years ago f we hear the name Arjun, then it is only Rithvik Dhanjani & if Purvi it is only Asha Negi. Arjun & Purvi means it is only Ashvik and they are irreplacable..

Thank you Ektaji for giving us Arvi.

6 years ago If we hear the name Arjun, then it is only Rithvik Dhanjani & if Purvi it is only Asha Negi. Arjun & Purvi means it is only Ashvik and they are irreplacable..

Thank you Ektaji for giving us Arvi.

+ 4
6 years ago Rithvik Dhanjani and Asha Negi are the only ones who will be remembered as Arjun and Purvi's jodi is mentioned. The makers should have picked a different name.

6 years ago there is only one Jodi which will remain as arjun and purvi in our hearts and that is asha,rithvik and no one can take their place

6 years ago One and only Arjun and Purvi and they are Rithvik Dhanjani and Asha Negi. Arvi/ Ashvik rockz

6 years ago Arjun & Purvi means it is none other than Rithvik Dhanjnai & Asha Negi.