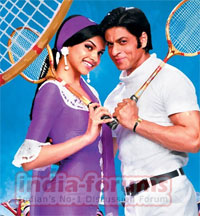 Two of the biggest releases of the year will premiere this Diwali, on the same day, and both are awaited with much trepidation. Farah Khan's 'Om Shanti Om', produced by Shah Rukh Khan, and Sanjay Leela Bhansali's 'Saawariya' are the names on every movie-goer's lips. Enough has been said about whether they should have been released simultaneously, and which one is going to be a bigger hit. We analyse the prospects of these two talked-about flicks.

The story of 'OSO' begins in the 1970s, with a junior artiste (Shah Rukh Khan) named Omprakash Makhija. He is in love with the reigning queen of Bollywood, Shantipriya (Deepika Padukone). Shantipriya is in love with Bollywood big shot, Mukesh Mehra (Arjun Rampal). Om is killed in a scuffle with Mehra, but is re-incarnated as a superstar, while Shantipriya is reborn as a college student. The present day Om gets flashes of his past birth, leading to a musical climax, much like the one in Subhash Ghai's 'Karz'.

'OSO' has a lot of highlights, including the now-famous song with 31 movie stars in it, and, of course, SRK's six-pack abs. Also, Shah Rukh's chemistry with Deepika sizzles the screen. The presence of Shreyas Talpade guarantees some good acting, and Farah Khan is all set to prove herself, once again, as the queen of masala
Featured Video 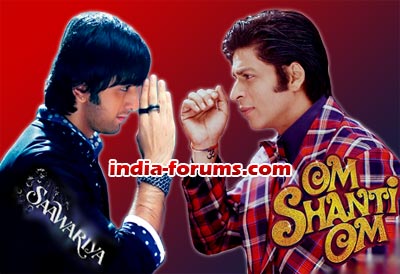 However, Arjun Rampal's lack of skills as an actor, and the rumours that the movie is a remake of 'Karz', may pull down the enthusiasm a little.

On the other hand, the story of 'Saawariya' is based on Dostoyevsky's short story, 'White Nights'. The two protagonists wait for the love of their lives. The narrator spends four consecutive nights in the company of a girl, and falls in love with her. When he confesses his feelings on the fourth night, she leaves with her other lover.

Highlights of the movie include Rani Mukherjee and Salman Khan in pivotal roles. Of course, Bhansali fans are eagerly looking forward to the elaborate details on the sets, which make his movies almost surreal. This is the first Indian movie, to be shot entirely on set. Sonam Kapoor and Ranbir Kapoor are in every paper and on every channel, and Ranbir's striptease has made the headlines. Incidentally, his famous father, Rishi Kapoor, did something similar in his debut, 'Bobby'. 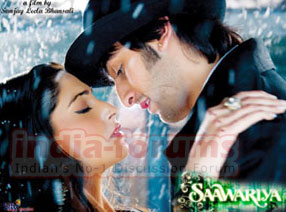 Hopefully, Bhansali will not inundate the audience with mundane details in the script. Also, given the fact that the protagonists are both newcomers, there is a risk of the grand movie falling flat on its face, overweighed by expectations.

Both 'Saawariya' and 'OSO' are linked rather interestingly. Shah Rukh's co-star in his 1992 debut, 'Deewana', was Ranbir's father, Rishi Kapoor. Salman Khan and Rani Mukherjee make a guest appearance in a song in 'OSO'. And, if rumours are to be believed, Deepika and Ranbir were once a couple.