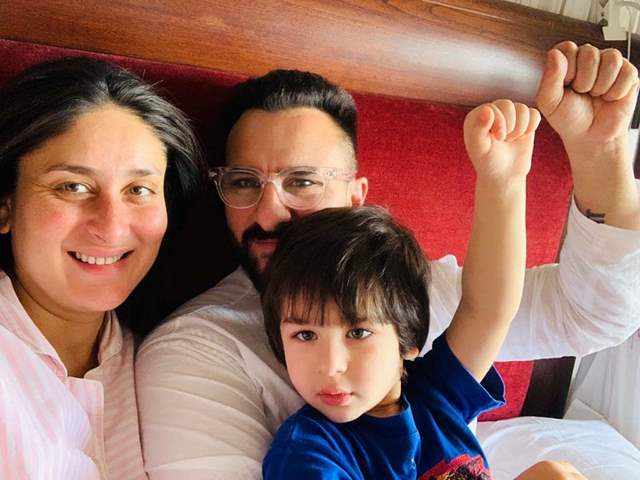 Saif Ali Khan and Kareena Kapoor Khan are currently expecting their second baby and before the arrival of their little bundle of joy the couple have taken a new abode and are all set to welcome their baby in their new home.

After spending more than eleven years in their current home at Fortune Heights, Bandra, the Pataudis decided on having a bigger place to fit in the new member of their family and hence they have purchased a bigger house at Satguru Sharan, a building next door in Bandra, Mumbai.

At the moment, Kaareena is in her third trimester and keeping in mind the time frame before her due date, both Bebo and Saif are getting done with the designing of their new house.

While we can’t wait to see the first glimpses of their new house, their interior designer gives us a sneak peek into what all the new house consists of. Right from Taimur’s living space to a nursery for the new member, here’s how their new pad has turned out to be.

Saif and Kareena’s new house is an extension of sorts of the old one. They had become extremely comfortable with their house in Fortune Heights; they just didn't want to move out. So, the new house, which they should be moving into shortly, has a feel of the old pad but it also meets their new set of requirements with their second baby on the way. It has a beautiful new nursery for the baby, and Taimur’s own space as he’s growing up. It’s a lot larger than their old house; it’s more spacious with beautiful terraces, a swimming pool, outdoor areas, and open spaces that have been landscaped. It has room for everyone.

Darshini further revealed that Saifeena love luxury and comfort and they have even got their old house’s vibe into their new house. Shah added,

They like their spaces to feel like their travel diaries. Everything that they have at home is something they have collected over time, and it has a memory or a story attached to it. Like, they love England, they like the colonial-classic style of decor. They also don’t like anything that's loud. Like their Fortune Heights’ home, even their new house has a library, artworks, antiques, candles, a certain kind of furniture.

For the uninitiated, Darshini had also designed Saifeena’s old house at Fortune Heights even before they started living together in 2008-09. The interior designer said that with the arrival of their 2nd baby, they are ensuring that everything’s done on time.

We go back a long time. They moved in after I completed the work on the house in Fortune Heights. It was great for the two of them. After Taimur was born, we made sure he has a nursery at home and his own little space. With their second baby on the way, we just pulled all stops and ensured that we wrap up everything in time for them to move into their new house.

She concluded saying that not only in this house, even during the refurbishing of their Pataudi Palace Bebo was equally involved. She then said on a concluding note,

Kareena has been hugely involved with the new house’s decor. Even with the progressing pregnancy, she continues to step out, check out the stuff, pick up things that she likes for the place. The house is almost ready to welcome the family in.” “The palace has a 100-year-history. But even there, you will find everything that defines Saif and Kareena’s taste. Books, art, antiques, black and white tiles, the gorgeous fireplaces,

2 months ago ya they are living in the hut,so they have to move out