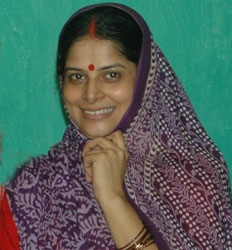 Make-up has always been a part of actor's life. But nowadays, it's being used to create other effects than bringing out the best of an actor's profile.

Actress Nupur Alankaar, who plays the role of Damyanti in Sony's Jeet Jayenge Hum, has been experiencing this differed effect of make-up lately.

She says, "My character is such that she comes from a poor family. So, when for the first few episodes I used make-up I kind of felt fake. I was just not looking right for the part. So then I decided to face the camera with nothing but the sindoor on my face,"

However, now the time for turning tables have come. Says Nupur, "Now, I will be shown getting more ill. My asthma will aggravate due to the working conditions of the bangle factory. And to look shoddy I will be now be using make up. I need to create an effect that would make me look hollow with dark circles, gaunt face and pale skin."

Guess that's the magic of make-up!