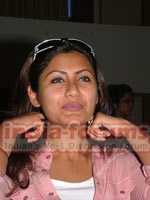 In a first-of-its-kind deal in Bollywood, production house Adlabs and musicians Shankar-Ehsaan-Loy will co-produce the music of film "Johnny Gaddaar". The deal scraps the work-for-hire format usually followed in the industry, and according to Pooja Shetty, director, Adlabs Films Ltd, "it allows both of us to experiment and share risks-rewards equally". Adlabs production "Johnny Gaddaar" is a crime-thriller directed by Sriram Raghavan, starring
Featured Video

Dharmendra, Vinay Pathak, Zakir Hussain, Rimmii Sen and newcomer Neil Nitin Mukesh. Accordingly, the film's music has been given a very young, international and trendy touch by the musician trio, with the mood swinging from dark and menacing to zingy and racy.

Shankar Mahadevan said about the venture: "With this new collaboration we (Shankar-Ehsan-Loy) are the producers of the album, as well as music directors, and have an equal share in the success of the album. The new format is very encouraging for music directors." He gave credit to Pooja for initiating the collaboration deal. "When we discussed the idea of sharing the music on a larger level with Adlabs, Pooja Shetty showed great vision. She has given immense support to this new partnership," the music directors signed off.