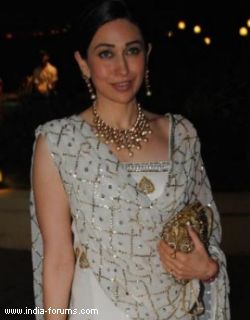 Actress Karisma Kapur says being a mom is the best feeling in this world but at the same time she feels that no books or tips can prepare a woman for motherhood.

Karisma, a mother of two, however, opines that nothing can prepare a woman for motherhood.

'Just like any mum, I had read a lot of books, then of course you ask your own mum and you get a lot of tips. But frankly, my opinion is that nothing can prepare you for motherhood,' she said.

'You know, when you hold your baby in your arms, it is a totally different feeling. So, nothing can really prepare you for that,' added the actress who quit her then 12-year-old career after her marriage to Delhi-based businessman Sanjay Kapur in 2003.

The actress was speaking at a press conference to announce her tie-up with an online baby products brand 'BabyOye.com'.

Karisma, the first Kapoor girl to step into showbiz, is making her comeback on the big screen with Vikram Bhatt's 'Dangerous Ishq'.

She has had an illustrious career and starred in 58 films. Some of her notable performances include 'Raja Babu', 'Andaz Apna Apna', 'Hero No. 1', 'Biwi No. 1' , 'Fiza', 'Zubeidaa', 'Raja Hindustani', and 'Dil To Pagal Hai', for which she won the national award for the best supporting actress.