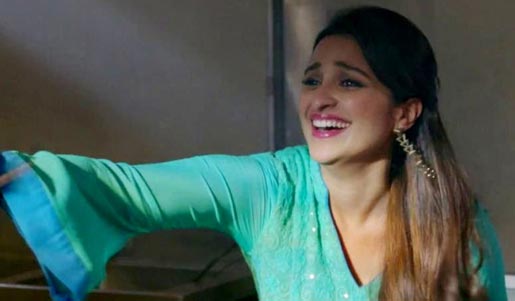 Bollywood's favourite girl-next-door Parineeti Chopra says she will wear a bikini only when she is in the right shape, but not right now.

Yash Raj Films is known for presenting their heroines in the most glamorous avatar on the screen. However, the 25-year-old, who has done five films with the banner including her forthcoming releases "Daawat-e-Ishq" and "Kill Dill", is yet to flaunt her glamorous side.

Q: So are you following the Yash Raj Films tradition of heroines getting into a bikini?

A: No, no, no! I am not doing anything that startlingly glamorous. But let me tell you I'm sure I'll wear the bikini at the right opportunity. I've to get into the right shape for that.

Q: For that you'll have to cut down on your pizzas?

A: Hai na? It's impossible for me to cut down on my pizzas entirely. But I am trying. But "Kill Dill" doesn't really require me to be ultra-slim. I play a girl from Delhi and I've to dress, look and speak in a certain way. It's not as if I, Parineeti Chopra, would go out of character to prove how glamorous I can look.

Q: Why is such a fuss about what you wear?

A: Wearing western outfits is not such a culture shock for me as it is made out to be. I am unnecessarily being slotted as the-girl-next-door because I guess every heroine has to be put in a compartment.