Mumbai, Aug 13 (IANS) Shimit Amin, whose first and so far only film 'Ab Tak Chhappan' came a good three years ago, is flummoxed by rumours that his just released 'Chak De India' had to be re-shot.

Starring Shah Rukh Khan in the lead role, the film has opened to rave reviews.

Clearing the rumours, Amin told IANS: 'Not a frame has been re-shot - any crew member can vouch for that. There was another rumour about the hard disc crashing. It didn't happen. Even if it did there was nothing to panic about. Any computer-savvy guy knows hard discs are backed up and can easily be replaced.' 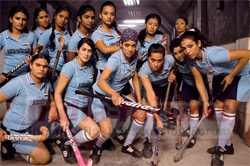 For Amin, the leap from the gritty cops film 'Ab Tak Chhappan' to the world of female hockey players in 'Chak De India' is astounding.

'For me it's just the script. I react to the script. It didn't matter which genre. But yes, the thought of doing a hockey film was challenging because nobody had done it. It gave me a chance to explore an entirely untried genre,' said Amin.

'Jaideep Sahni's script was something I wanted to put on screen. I've come from the US and this film gave me a chance to connect to one new part of Indian culture,' he added.

Though film has been received well at the box office, audiences responded somewhat warily to the theatrical trailer of 'Chak De India' where all the hockey playing girls were brought on screen one after another.

'The trailer was an experiment, just as much as the film. We clearly wanted to introduce the 13 characters through the film. It was a broad canvas. Some people did like it. Others didn't. It doesn't have romance songs and the formula. My film is about characters who'll hopefully involve the audience within five minutes of playing time.'

Casting for the roles of the female hockey players was a gruelling task.

'It was very difficult to cast. We had to find girls who could play hockey and speak lines that were quite complicated. We had to go to different parts of the country and find women who could play sports. We looked for girls who were firstly athletic, and then see if they could hold the hockey stick.'

In the course of making the film Amin discovered how poorly hockey is treated in the country.

'When I'd go out on Sunday mornings searching for female athletes, every single green patch that I passed had boys playing cricket. No hockey anywhere - forget female hockey players. I couldn't even see one female cricketer anywhere. I'd be so envious. If I had to make a cricket movie my life would be so much easier. But we loved the script so much we wanted to be true to it as much as possible.'

Finally, after months of search, semi-athletic females were chosen.

'We had to choose semi-actors and train them to play hockey and to act. For three months we would wake up at 4.30 a.m. and they'd play hockey for five hours and then undergo physiotherapy.

'It was nerve-wracking. We didn't know if it'd work. But all the actors, hockey players and actors-players helped one another. They all became one community. The cast never felt it was acting. Finally, they looked convincing as a team.' 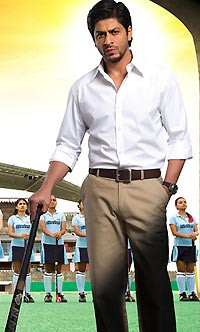 Amin, who hired expert from the US to train and choreograph the team, says that the idea behind the film was to revive the sport.

Talking about Shah Rukh's suitability for the game, he said: 'Shah Rukh had played hockey and his passion for the game remained. As for Shah Rukh, you'd be surprised to know how similar in attitude he is to Nana Patekar who starred in my first film.

'They both understand the cinematic medium completely. Their knowledge of the medium is astounding. Look at the varied work Shah Rukh has done... from Mani Kaul to Aziz Mirza to Aditya Chopra.'

Amin and Shah Rukh's association go back a long way.

'During 'Asoka' I worked in his company, doing promos. He knew what I am all about. As for his image, to date people consider Shah Rukh's performance in 'Swades' among his best. And that was different. We never thought of his image or anything else.

'I was just interested the whole community of hockey, just as the whole relationship between cops and crime interested me in 'Ab Tak Chhappan'.'

He's all praise for his producers.

Amin is happy that sports genre is gaining popularity among filmmakers.

'I'm glad films on sports are being made in Mumbai. There's just three-four genres to explore. I've done what I wanted to do in 'Chak De India'. What am I doing next? I wish I knew. But it has to be the story that interests me. But yes, I've a contract for three films with Yash Raj Films.'